Black money is a term used to describe the proceeds of illegal activities that are not reported to the government for tax purposes. It is a major issue in many countries around the world, including India, where it is estimated that black money accounts for a significant portion of the country's GDP.

There are several ways in which black money is generated, including tax evasion, money laundering, and corruption. In some cases, individuals or businesses may underreport their income in order to pay less in taxes, while in other cases, the proceeds of illegal activities such as drug trafficking or arms dealing may be laundered through the financial system in order to conceal their origin.

The existence of black money has far-reaching consequences for both the economy and society as a whole. For one, it allows individuals and businesses to avoid paying their fair share of taxes, which can have a negative impact on the government's ability to fund public services and infrastructure. Additionally, black money can fuel corruption and undermine the rule of law, as it often involves the illegal use of power and influence.

There are several measures that governments can take to combat the problem of black money. One approach is to increase the transparency of financial transactions and tighten regulations around money laundering. This can be done through the implementation of stringent reporting requirements and the use of advanced technology such as blockchain to track financial flows.

Another approach is to improve the effectiveness of tax collection systems and increase the penalties for tax evasion. This can include the use of data analytics to identify and investigate cases of tax evasion, as well as the development of stronger laws and enforcement mechanisms to punish those who engage in such activities.

Finally, it is important to address the root causes of black money, such as corruption and illicit activities. This can be done through the promotion of transparency and accountability in the public sector, as well as through the implementation of measures to reduce the demand for illegal goods and services.

In conclusion, black money is a complex and pervasive problem that has significant negative impacts on both the economy and society. Tackling it will require a multifaceted approach that addresses both the demand and supply sides of the issue, including efforts to increase transparency, tighten regulations, and address the root causes of illegal activities. 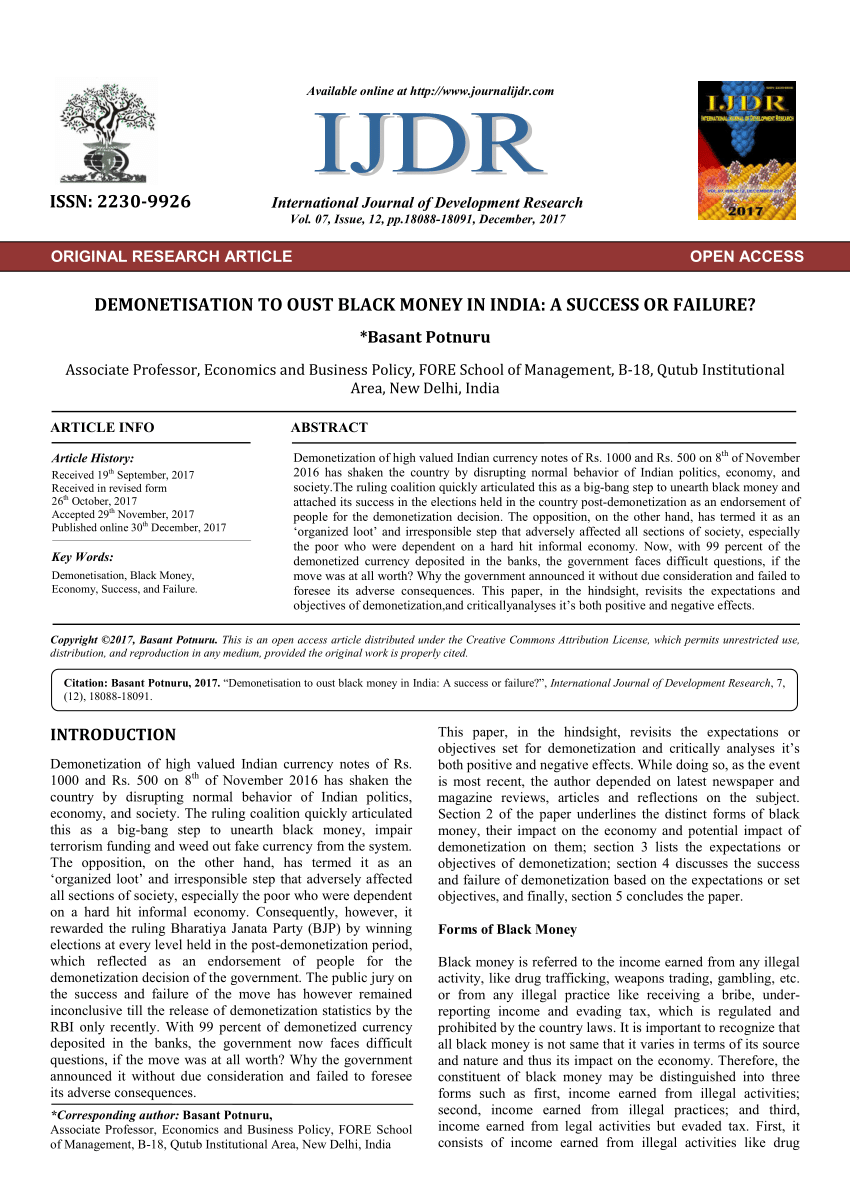 The existence of black money is a worldwide phenomenon. Pranab Mukherjee gave in-principle approval for the study on 28th October 2010. Inflation: The increase in prices of commodities like petrol, etc. It is expected that many scams will come to light for making black money through privatisation. The unofficial economy is popular among the masses as black money and the official economy as white money. Attack the point, not the person. Stick to addressing the substance of their comments at hand. 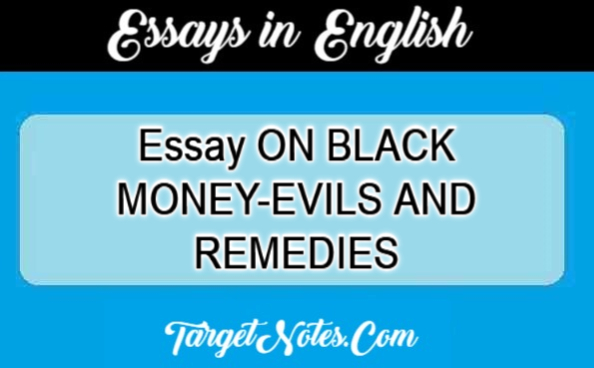 This works through codes, contacts and trust with no paperwork at all. However, the Institutes were unanimous in concluding that the proportion of black money lying within India was higher than what was present outside. ADVERTISEMENTS: The minister rode roughshod over departmental colleagues to give contracts to favoured companies. And that's also why nobody should feel like they are immune to scams - being overconfident makes you let your guard down, and then you may feel even more shame if you do get scammed and not report it. In this article, we will discuss the provisions of the Black Money Act along with the judgment by the Calcutta High Court in the case of Shrivardhan Mohta v. 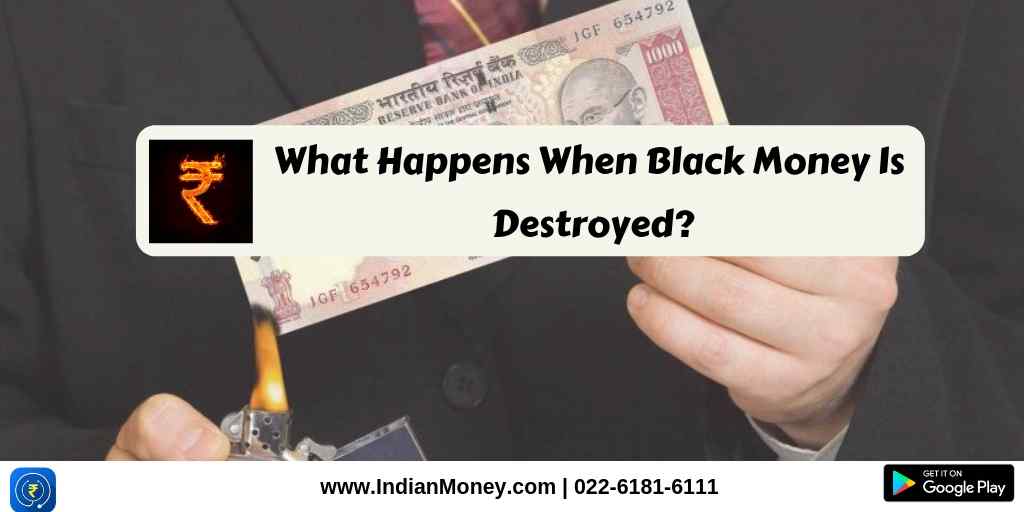 Availability of licenses and permits should be made hassle free. It can only be curbed if each and every citizen of the country contributes his bit. The excess of money leads to purchase non- essential articles, which gives demonstration effect. To aid in clarity, this article is further divided into four sections. Do not concern-troll or attempt to intentionally mislead people. Origination of black money disturbs the balance of trade, commerce and industry of the country. Numerous reports suggest that it was the heavily bureaucratized tax regime pre-1991 that resulted in many individuals trying to evade tax. 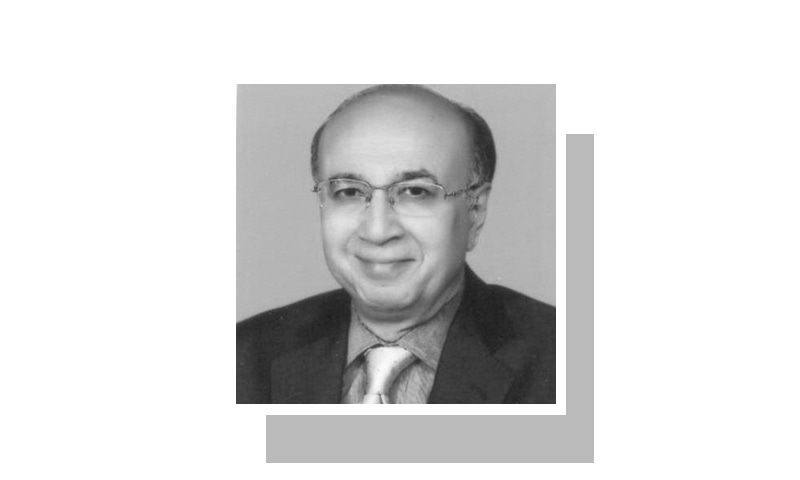 November 4, 2015 at 10:38 am It never ceases to amaze me how rich people fall for the dumbest things. And I am the originator! In continuing that, the Government of India also introduced the Gold Bond Scheme in 15 th March 1993 to unearthing black money. So the guy was threatening him with the government, arrest, and it scared him. Thus, the more stringent the measures of control and the more regulated an economy, the greater will be the effort to violate it which will increase hoarding, fraud, artificial scarcity and the resultant black money. Agents and middlemen pocket considerable sums as their share of commission in the payoff to influence political decisions. Black money has long been the subject of heated political debate in India. 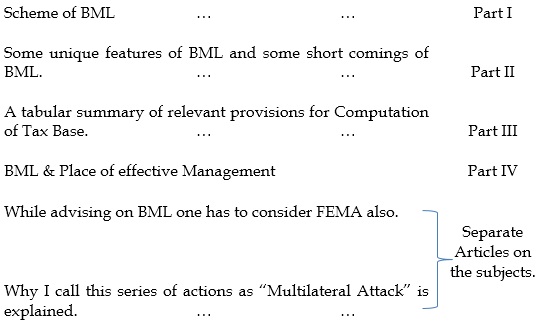 Additionally, the judgment made it clear that the disclosure of foreign assets and incomes should also be a subject-matter of the BM Act, even in cases of inherited foreign assets and incomes. In a survey in 1996 conducted by the World Economic Forum of 200 business executives from 49 countries in the world on specified index of corruption in tax evasion, India was ranked 40 i. Tax Evasion: In March 1970, an enquiry committee was appointed under the chairmanship of Mr. Making it easier and less cumbersome, not to mention less expensive, to pay tax might encourage less tax evasion. The massive amount of black money in our country has created a parallel economy.

He gave them to my friend and exchanged them into Chinese yuan. The second section contains a more precise definition of the term and a short note on the nature of black money. There bonds were sold upto January 31, 1992. During the happening of the above, the BM Act became applicable which imposed stringent penalties on non-disclosure of assets and incomes, including imprisonment and three times tax liability as penalty. Watch the video below to see in action the Black Money scam exposed on WCPO: They suggest you give them cash for the remover. The National Institute of Public Policy has roughly estimated the amount of black money in our economy at around Rs 37,000 Crores. 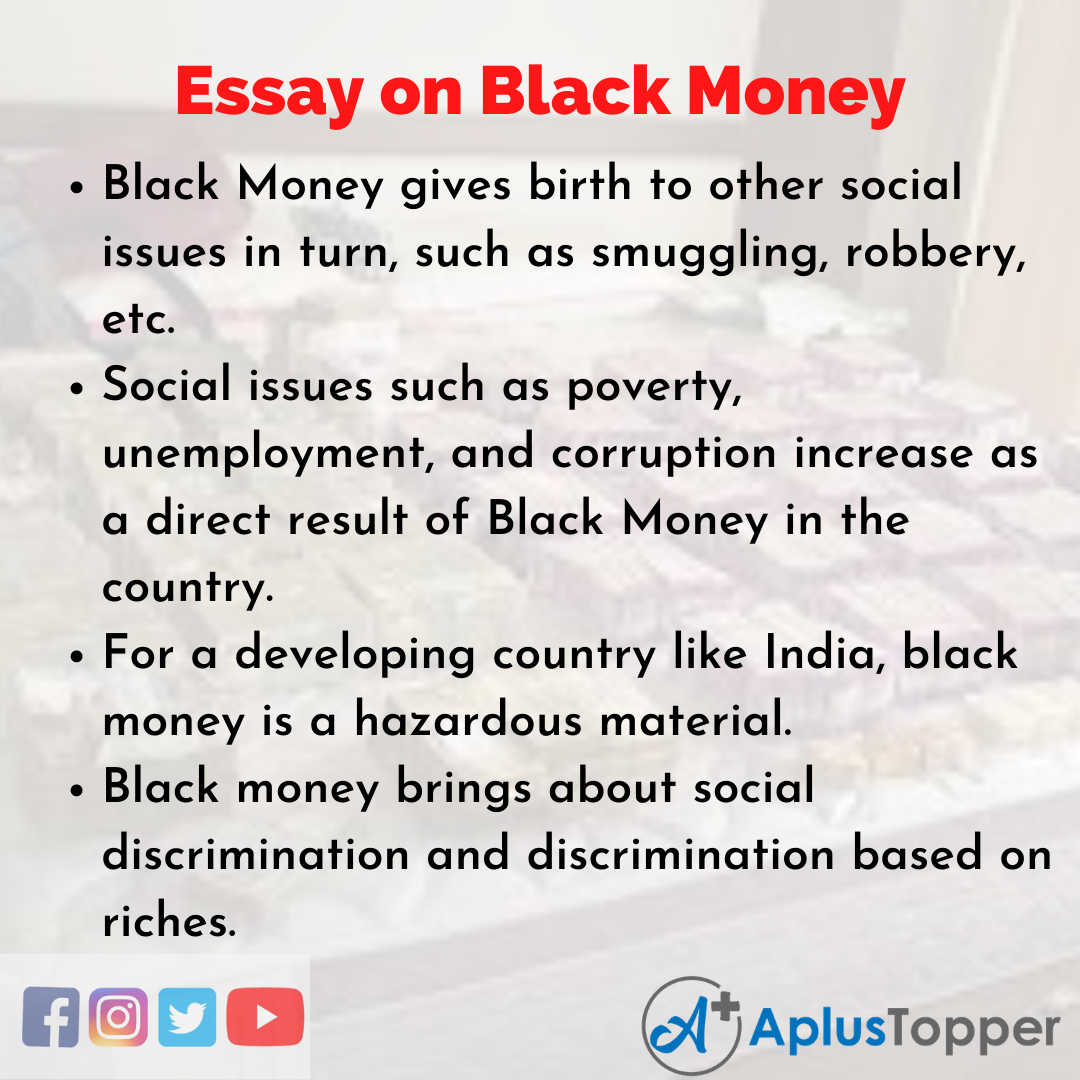 ADVERTISEMENTS: It practises those activities which are contrary to the principles of economic policy pursued in an economy. It becomes black because no taxes are paid on it. The FERA violations of around Rs. Its direct impact is the loss of Government revenue. However, it could not do so. Note help from captive but this help was definitely not enough. Spurious notes or counterfeit money is generally not counted as black money.

Black money, once generated, either from illegal activity or from lack of disclosure, is typically stashed away, in the infamous Swiss banks. Chidambaram has introduced Voluntary Disclosure of Income Scheme VDIS while presenting the annual budget for 1997-98. The focus was the report is in a In 2017, after the 2016 demonetisation exercise which may have been prompted by this report, among other factors the Standing Committee on Finance quizzed the Finance Ministry about the report. Different Rates of Excise Duty: ADVERTISEMENTS: Within similar products, there are different rates of excise duty. Under-estimation: A large underground economy and growth of black income lead to under-estimation of the true size and incorrect picture of the economy by the officially complied national income data. The legislation is a penal law which imposes imprisonment along with penalty. That means meeting with the seller which is one of their accomplices in a different parking lot. This however is another level of buck-wild. PM Modi had announced demonetisation just to target black money. It is the responsibility of the person inheriting the overseas asset to disclose it as soon as the legal rights over the same are passed on to the assessee. The parallel economy, run using the unaccounted black money, has taken a toll on the mainstream economic development and the increasing might of the parallel economy also showcases the increasing corruption in the society. Chefs, artists, musicians, and creatives from various other disciplines can set up their own profiles. Prosecution Under Black Money Act For Inherited Foreign Bank Accounts After the introduction of the Black Money Act, several questions as to dealing with undisclosed foreign accounts inherited by the assesses were raised. The only substance that will remove the coat while keeping the notes intact is costly.

The tax regime in the country should be made liberal to reduce tax evasion. Photo submissions are limited to exceptional and relevant photos during the week however these rules are relaxed within reason on weekends. But now black money has ceased to be regarded as a symbol of dishonesty. Measures were taken by the Government to Curb Black Money The government has undertaken many measures to curb black money. ADVERTISEMENTS: A mason or a carpenter earns about Rs. We will discuss the various methods of creating black money in the following section.