Albert Bandura is a renowned psychologist who is best known for his contributions to the field of social learning theory. Bandura's theory suggests that individuals learn new behaviors, attitudes, and values through observation and imitation of others. This theory has had a significant impact on the way we understand and approach the process of learning, particularly in the realm of education and child development.

According to Bandura, there are several key components to social learning theory. First, he identified the role of attention in the learning process. In order for an individual to learn from observing others, they must be paying attention to the behavior being modeled. This can be influenced by factors such as the perceived relevance or importance of the behavior, as well as the perceived competence or attractiveness of the model.

Another important aspect of social learning theory is retention, or the ability to remember and recall the observed behavior. Bandura believed that individuals must be able to retain information about the observed behavior in order to later reproduce it. This can be influenced by factors such as the complexity of the behavior, the frequency with which it is observed, and the individual's prior knowledge and experiences.

A third key component of social learning theory is reproduction, or the ability to actually perform the behavior that was observed. Bandura argued that individuals may not always be able to reproduce a behavior simply by observing it, and that there are a number of factors that can influence an individual's ability to do so. These factors include the individual's physical and cognitive abilities, as well as the presence of any external rewards or punishments.

One of the key implications of Bandura's social learning theory is that individuals are not simply passive receivers of information, but are active participants in the learning process. This has important implications for the way we approach education and child development, as it suggests that we should be fostering environments that encourage active learning and engagement with the material.

Overall, Bandura's social learning theory has had a significant impact on the field of psychology, and continues to be a valuable framework for understanding the way we learn from and interact with others.

The results indicated that while children of both genders in the non-aggressive group did tend to exhibit less aggression than the control group, boys who had observed a non-aggressive, opposite-sex model were more likely than those in the control group to engage in violence. Sociability aids humans in communication; forming thoughts, behaviors, and opinions; and even physiology. If a child wants approval from parents or peers, this approval is an external reinforcement, but feeling happy about being approved of is an internal reinforcement. Since data was collected immediately, it is also difficult to know what the long-term impact might have been. Classical conditioning or Pavlovian conditioning is the theory that people learn by association, through the simple pattern of stimulus and response. 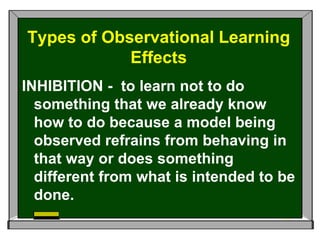 There is, however, one major difference between the three. The behavior may be noticed but is it not always remembered which obviously prevents imitation. Later, even if circumstances have changed, those feelings may be hard to shake. This theory was developed by psychologist Through exposing groups of children aged three to six to aggressive behavior, Bandura sought to prove that human behavior is learned observationally through modeling, or by observing others—and that these observations can guide actions and result in imitated behaviors in subjects later on. San Francisco: Springer; 2011. Then, you internalize these negative ideas about yourself.

What Does Social Learning Theory Say About Human Behavior?

Reinforcement can be external or internal and can be positive or negative. Through several gradual therapy sessions, Scott was exposed to the same stimuli, but the social, mental, emotional and physical reinforcements were all positive. Retention Learning takes place when we can collect and recall information. Internalized stigma Some First, you observe prejudice, bias, or discrimination from the public. Second, the people around the child will respond to the behavior it imitates with either reinforcement or punishment. The social worker could employ social learning theory, assessing role models and stimuli the student is regularly exposed to that could be reinforcing aggressive, disruptive behavior or discouraging positive, sociable behavior. Here are 5 ways to make sure the information you are getting is safe and accurate June 1, 2022 in A Personal Perspective: Social media tips for taking care of curly hair can help to normalize different hairstyles, contributing to growing acceptance of curly locks.

What Is Bandura's Social Learning Theory? 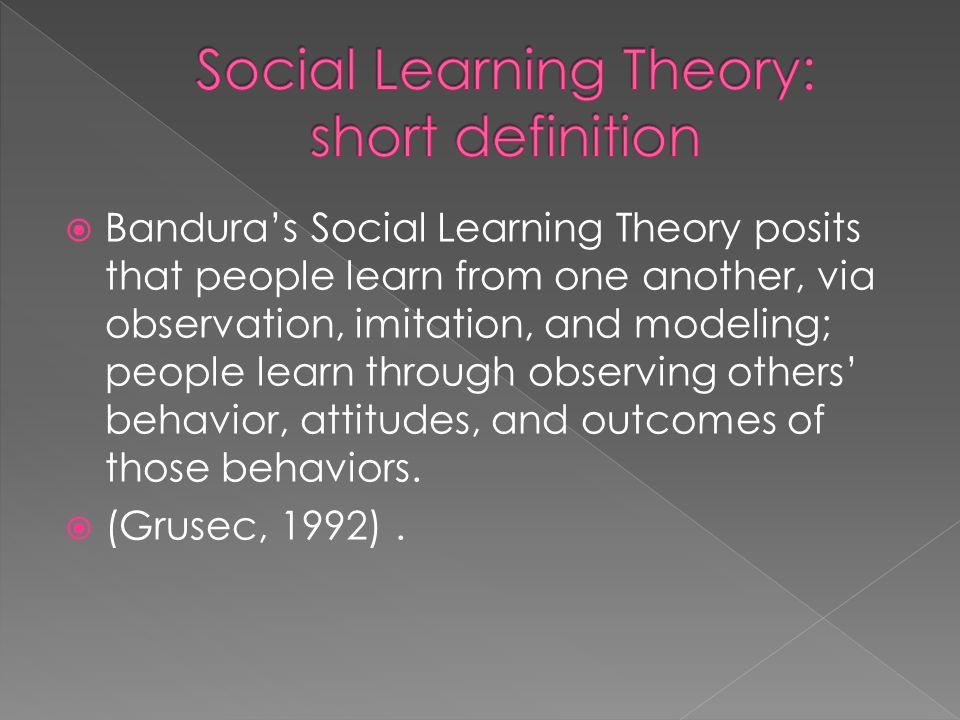 Cognitive-behavioral therapy is a leading treatment for a variety of mental health conditions. This is called observational learning — that is, learning by watching others. This is a debate at the center of many socialization behavioral theories, many of which rest on an assumption that leans more strongly in one direction. We can also learn by reading, hearing, or watching the actions of characters in books and films. The motivation to identify with a particular model is that they have a quality which the individual would like to possess. 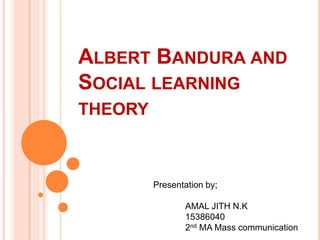 Transmission of aggression through imitation of aggressive models. This is another context in which the associated rewards or punishments tend to play a major role, and a variety of internal and environmental factors must be taken into account in its application. Because the experiment took place in a lab setting, some critics suggest that results observed in this type of location may not be indicative of what takes place in the real world. In this study, researchers abused a doll—both physically and verbally—while pre-school-aged children observed. Known as observational learning, this type of learning can be used to explain a wide variety of behaviors, including those that often cannot be accounted for by other learning theories. Journal of Personality and Social Psychology.

If the vicarious reinforcement is not seen to be important enough to the observer, then they will not imitate the behavior. Such experiences are not limited to physical behaviors, but also include previous expectations, expectancies, and reinforcements. This theory is also known as social cognitive theory. For a behavior to be imitated, it has to grab our attention. Think about how easily you adopt the mannerisms of people you find yourself in frequent contact with — you adopt their slang, their intonation, and even sometimes their body language. For example, children and adults often exhibit learning for things with which they have no direct experience. They play housekeeping, thief and policeman, etc. 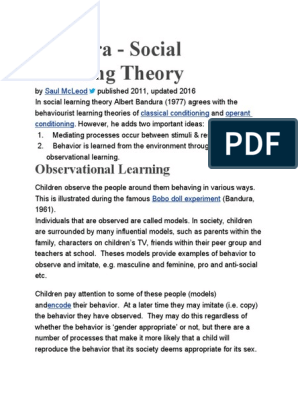 Should it be conducted within a group? Thirty-five years later, the same stimuli— even in non-threatening environments— elicited anxiety and fear. In short, we do what they do. These are How to reference this article: How to reference this article: McLeod, S. Addiction is another topic commonly addressed by the social learning theory. Two concentrations available: Direct Practice and Community, Administration, and Policy Practice. 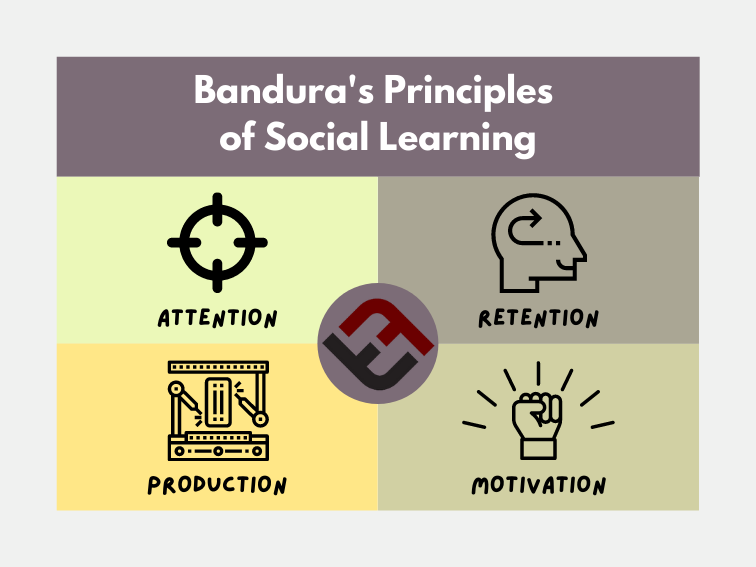 Theories about how the presence of brothers or sisters affects our personalities abound. Since they knew that the children were already frustrated, they may have been more likely to interpret the children's actions as aggressive. Another great way to incorporate the basic principles of Social Learning Theory in your training courses is gamified eLearning. A Word From Verywell In addition to influencing other psychologists, Bandura's social learning theory has had important implications in the field of education. In the situation where a model is like us, we are more prone to imitate their behavior. Do you think only people can become prejudiced? Children also learn the acceptable customs and norms of society from observation. As it was originally explained in 1963, social learning theory aligned mostly with previous behavioral theories—the novel component was its emphasis on imitation in learning. 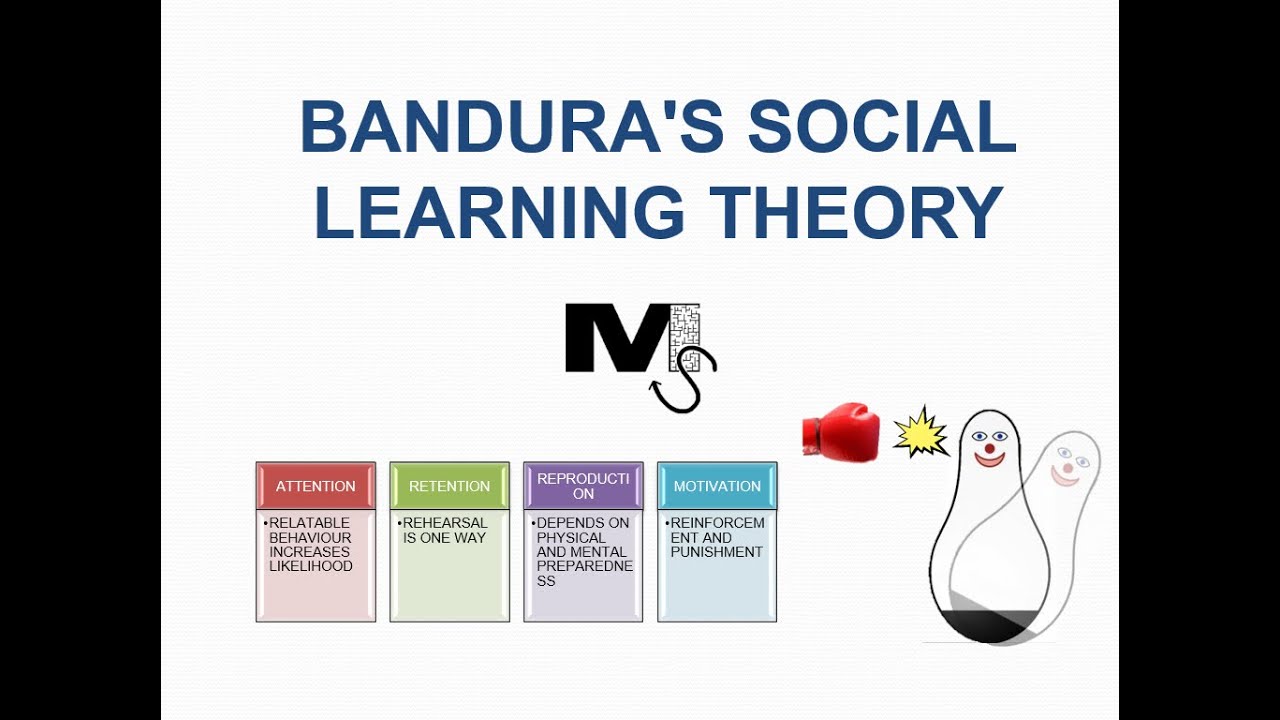 Before Bandura released his theory, psychologists mostly used a concept called behaviorism to explain how people pick up new information and engage in new behaviors. Learning, according to Bandura, can occur simply by observing others' behavior. Social foundations of thought and action: A social cognitive theory. Finally, this theory recognizes that just because something has been learned, it does not mean that it will result in a change in behavior. Recent work suggests that AI can also acquire biases. Attention, retention, reproduction, and motivation are required in order to benefit from social learning practices. The Bobo Doll Experiment In this experiment, Bandura showed a 5-minute film to a group of pre-school children. 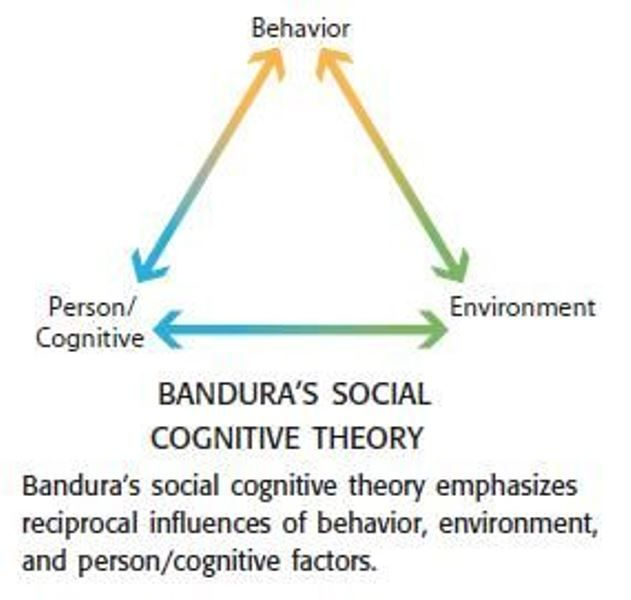 Through modeling, it is possible to acquire responses that we have never performed or displayed before. Behavior problems among adolescents exposed to family and community violence in Chile. What Is Social Learning Theory? Much of social learning is not immediate, so this process is especially vital in those cases. Bandura's theory believed that direct reinforcement could not account for all types of learning. Each of us has a vast network of belief systems that act as a sort of template to help us interpret and organize new information and experiences.