Colonialism and neo-colonialism are two interrelated phenomena that have shaped the modern world and continue to have a significant impact on global politics, economics, and culture. Colonialism refers to the historical process of European powers establishing and maintaining control over territories and peoples outside of Europe, often through military force, economic coercion, and cultural assimilation. Neo-colonialism, on the other hand, refers to the continued economic, political, and cultural domination of former colonies by external powers, often through more subtle means such as trade agreements, financial investments, and cultural influences.

The origins of colonialism can be traced back to the 15th and 16th centuries, when European powers began to explore and colonize the Americas, Africa, and Asia. This process was driven by a variety of factors, including the desire for new markets, raw materials, and land; the spread of Christianity; and the competition among European powers for global dominance. The impact of colonialism was profound, as it led to the exploitation and oppression of colonized peoples, the destruction of indigenous cultures, and the creation of a global system of inequality and exploitation.

One of the most significant legacies of colonialism is the continued economic and political dependence of many former colonies on their former colonial powers. This process, known as neo-colonialism, has allowed these powers to maintain a degree of control over their former colonies, often at the expense of the economic and political development of these countries. This is often done through trade agreements that favor the interests of the former colonial powers, as well as through financial investments and aid programs that are designed to maintain the dependency of these countries.

In addition to economic dependence, neo-colonialism has also contributed to the cultural domination of former colonies by external powers. This can take the form of the spread of Western cultural values and norms, as well as the erosion of indigenous cultures and traditions. This process has been facilitated by the proliferation of Western media and cultural products, as well as the influence of Western-educated elites in these countries.

The legacy of colonialism and neo-colonialism has had a profound impact on the global political and economic landscape, and has contributed to the ongoing inequality and exploitation that exists in many parts of the world. While there have been some efforts to address these issues, such as decolonization movements and efforts to promote economic development in former colonies, these efforts have often been met with resistance from the former colonial powers and other external actors. As a result, the legacies of colonialism and neo-colonialism continue to shape the world we live in today.

China and Neocolonialism in Africa

The neoliberal nature of the IMF means that it favors macroeconomic strategies such as raising tax rates; reducing welfare services; privatizing public goods like water, education, or health; and cutting wages and subsidies to offset low corporate taxation and economic inflation rates. Thus, this theory refers to the manifestation of the consequences of colonization in the colonized states by the West. To deter governments from squandering this capital, however, the IMF makes almost all of its loans conditional. Since the world-system is not organized to protect the sovereignty of thenations nor the human needs of their peoples, neocolonies everywhere arecharacterized by popular anti-neocolonial movements, and they invariably haveperiods of instability. Post colonialism is the period when decolonization started to emerge in the once colonized countries by the West. Today, the Jews, who were disliked by the Germans who accused them of siphoning money from the German system, are controlling a substantial chunk of the international money pool. Colonialism and Neo-Colonialism When a country and its people are directly controlled by a foreign ruling power, through political and economic means, it is referred to as colonialism— India under the British rule.

Difference Between Colonialism and Neocolonialism 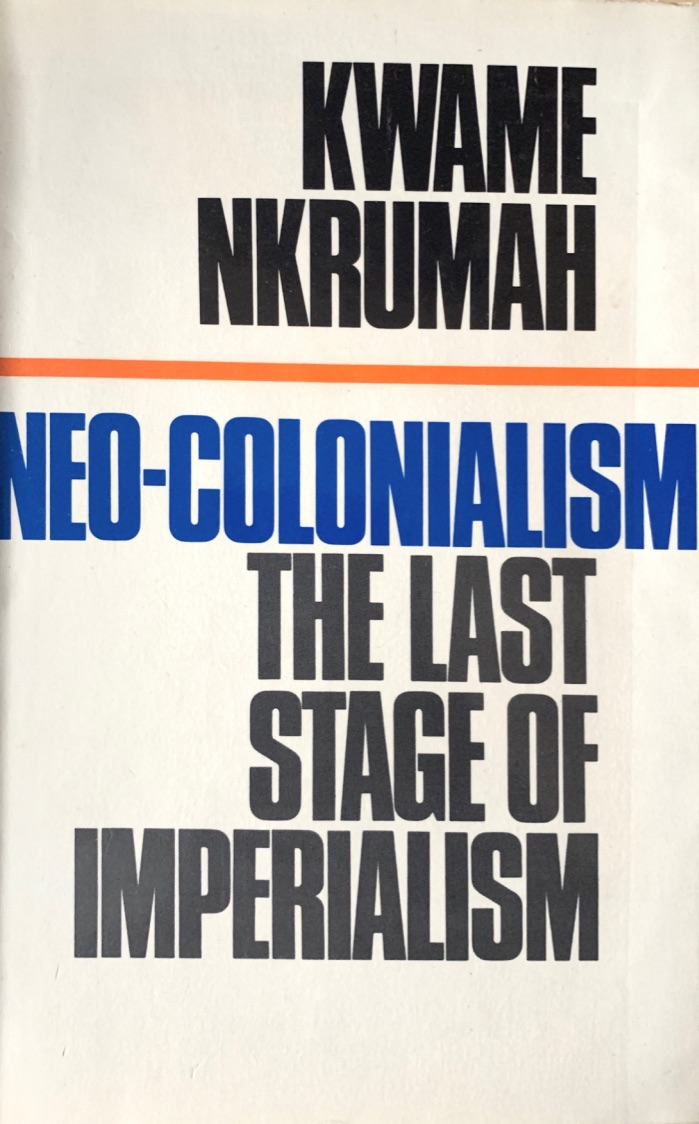 The nations involved were France, Britain, Denmark, Portugal and Germany. Many countries welcomed Chinese investment because it did not come with strings attached, such as a requirement for free elections, gender equality, anti-corruption programs, or government accountability. In order to have a better position in the society, people had to embrace these new colonial concepts. Suchinstability is a symptom of a fundamental fact: the neocolonial world-system contradicts human rights and democratic values, and for this reason, amongothers, it is not sustainable in the long run. Colonialism vs Neocolonialism Since both terms carry the word colonialism, one may think that they carry the same meaning, but there is a definite difference between colonialism and neocolonialism. 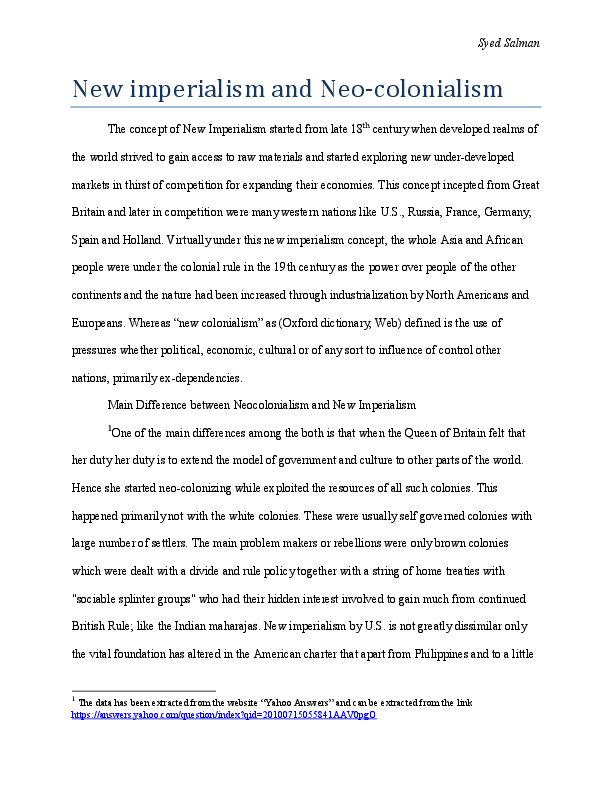 This reincarnated form of imperialism operates through financial and political processes and uses cultural imperialism as its ally. They are conscious of their technological superiority, and they dedicate serious efforts to retain it by deploying wealth in the course of acquiring more of it from others. We aim at providing virtual guidance to the ones taking their first steps into the world of Social Science, either through formal education or because of their never-ending quest for learning. Today, the IMF includes 190 member states. Colonialism is not an option any more. Both these periods refer to the period after the western Colonial period. Even peacekeeping is risky, in the end. 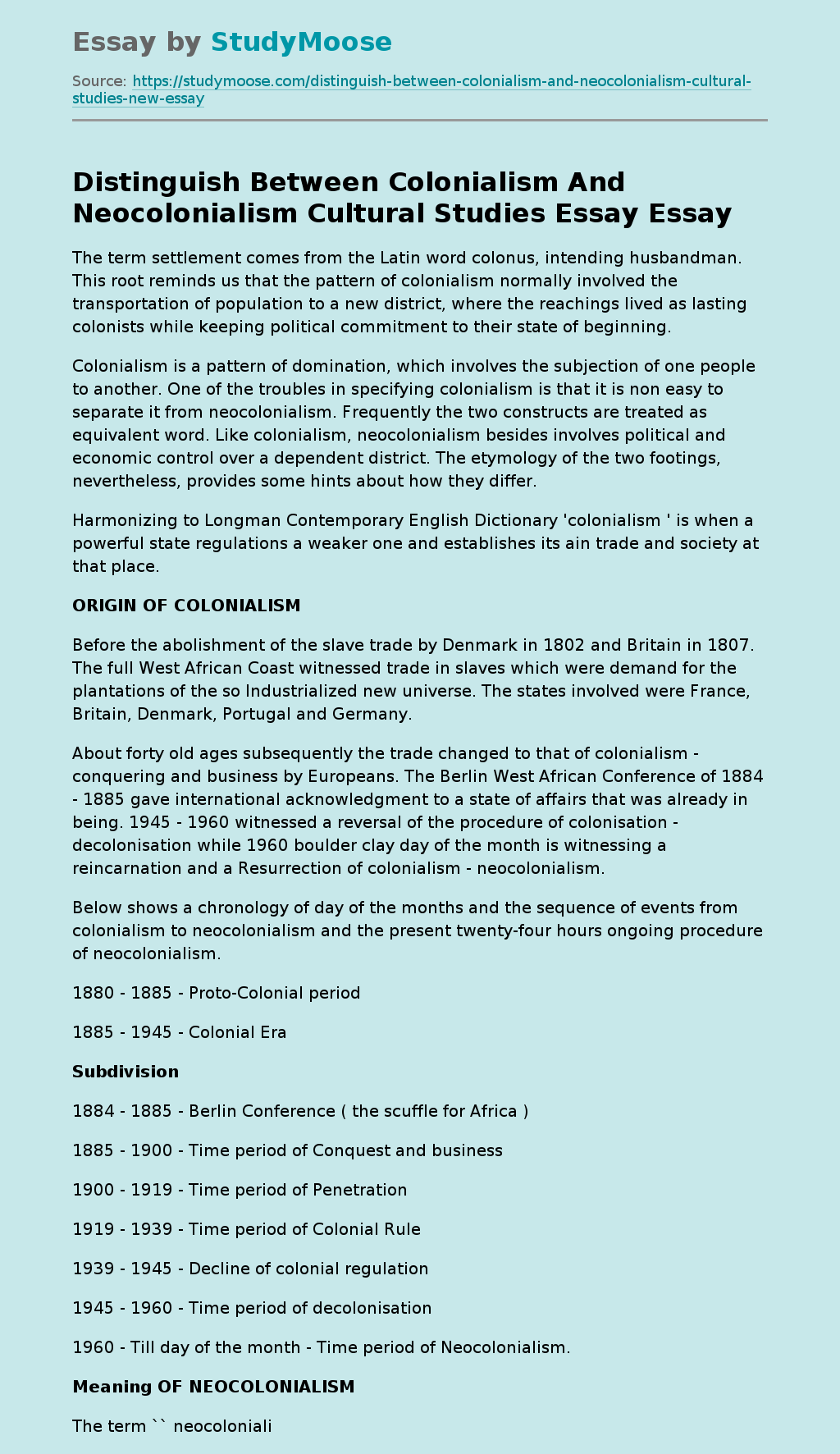 Geopolitical actions in imperialism The concept of geopolitics is strongly linked to that of imperialism, since it refers to power relations in the world demographic territory. Conditional loans can also trigger broader ramifications in borrower nations. This, again, invokes the dependency principle and mirrors colonialism. Products must be developed, sold, and then destroyed, before ushering in products that are more sophisticated. MD: How do global health governance systems work? After World War II, colonial systems were dismantled in a process referred to as decolonization. Instead, they took the earnings to their own country to enrich their strength and power. The Chinese know that Africa is going to be a smarter clientele continent going forward, and a more difficult and demanding negotiator in the future.

RP-E: The powerful global health governance alliance in place for over a century established strong partnerships with and funded prestigious U. ORIGIN OF COLONIALISM Before the abolition of the slave trade by Denmark in 1802 and Britain in 1807. However, neocolonialism took place in places other than the territories colonized in the 16th and 17th centuries. When we analyse both terms, we see some similarities as well as differences. The relationship was, in essence, being rebalanced out of necessity. Should African countries successfully manage the transition from nations that merely possess natural resources to manufacturing powers that can actually compete with China, the nature of their relationship with Beijing will change even further. Cookie information is stored in your browser and performs functions such as recognising you when you return to our website and helping our team to understand which sections of the website you find most interesting and useful. 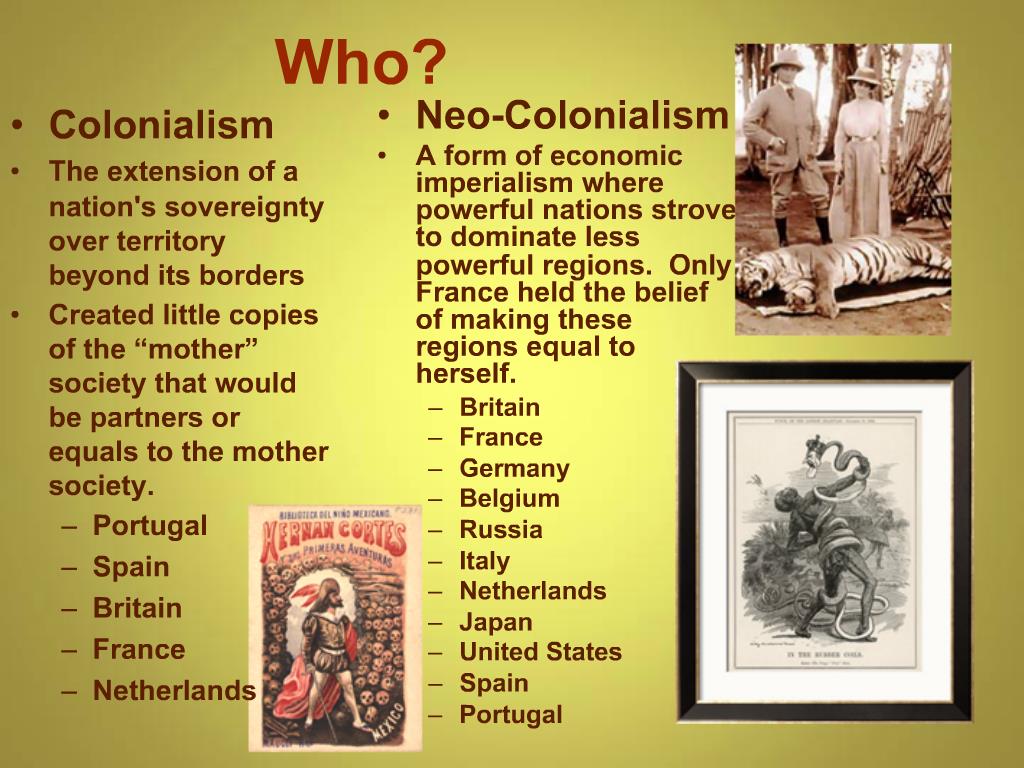 Thus there is at the present time a fundamental political conflict between the global North and the global South. Post Colonialism is the theoretical approach which is concerned with political or the social condition of the former colonies. Unlike in the physical colonization, the subjugated citizens would perhaps never awaken to demand freedom from How Markets are Prompted in the Victim Country This mechanism operates on the economy of the victimised country by manipulating the mindset of its political leadership and citizens. Thus, neocolonialism would be the result of business interests leading to deleterious cultural effects. First, multinational corporations MNCs , or companies with operations in multiple countries, apply pressure for certain political behaviors to suit their own interests. Their objectives were also different. In part, it was also the result of an calculated economic decision made by colonial powers. In the hierarchy of schemes that are driven by the intention of controlling the wealth of other nations, financial imperialism is a serious contender. These corporations such as Shell, Exxon Mobil etc. In my view, even though we are at a better place now, the way schools of public health continue to train students is not changing fast enough to help form the future leaders who can transform the guiding principles and architecture of the current global health system. In the sixteenth century, European colonization of Africa contributed significantly to European economic development. Moreover, even though the former colonies were now formally independent, they were still rather dependent on the West for assistance in developing economic and political structures. Second, foreign countries can exert influence over post-colonial states by only offering loans under certain conditions.

Neocolonialism and the IMF This is gradually leading to a loss of cultural identity. In this way, the citizens are conditioned and encouraged to shop for foreign goods and services. Recently democracy seems to have been fully entrenched in Nigeria through neo-colonial agent, such as the U. Colonialism and Neocolonialism Imperialism is also known as neocolonialism because it has the same motivation as the colonial phase: the exploration of new territories. Super high-cost weapon systems are then procured surreptitiously by both countries. Along a similar vein, fiscal austerity measures tend to leave the economically vulnerable equally worse off, particularly by making necessary services like healthcare and education more difficult to access.