Human activities have a significant impact on the natural ecosystem. From the way we produce and consume resources, to the ways we move about and build our communities, our actions have the potential to either enhance or harm the natural environment.

One way in which human activities affect the natural ecosystem is through the extraction and use of resources. For example, the extraction of fossil fuels, such as coal and oil, has contributed to climate change and air pollution, while the extraction of minerals and other raw materials can lead to habitat destruction and the disruption of natural systems. Similarly, the way we produce and consume food can have negative impacts on the environment. Large-scale agriculture and livestock production often involve the use of pesticides, herbicides, and fertilizers, which can pollute water sources and harm wildlife. Similarly, the transportation of food and other goods over long distances can contribute to air pollution and climate change.

Another way in which human activities impact the natural ecosystem is through land use and development. As the human population grows, we need more space to live, work, and play. This often involves the conversion of natural habitats, such as forests and grasslands, into urban and suburban areas. This can lead to habitat loss and fragmentation, which can be harmful to wildlife. In addition, the construction of roads, buildings, and other infrastructure can also disrupt natural habitats and cause pollution.

In addition to the direct impacts of human activities on the natural environment, there are also indirect impacts. For example, climate change, which is largely caused by human activities such as the burning of fossil fuels and deforestation, can lead to a range of impacts on natural systems, including rising sea levels, more frequent and severe weather events, and changes in temperature and precipitation patterns.

Despite these negative impacts, it is important to recognize that human activities can also have positive effects on the natural ecosystem. For example, the use of renewable energy sources, such as solar and wind power, can help reduce our reliance on fossil fuels and mitigate the impacts of climate change. Similarly, the conservation and restoration of natural habitats can help protect biodiversity and preserve the integrity of natural systems.

Overall, it is clear that human activities have a significant impact on the natural ecosystem. By understanding the ways in which our actions affect the environment, we can work to minimize negative impacts and enhance the health and resilience of natural systems.

How are humans affecting the ecosystem? 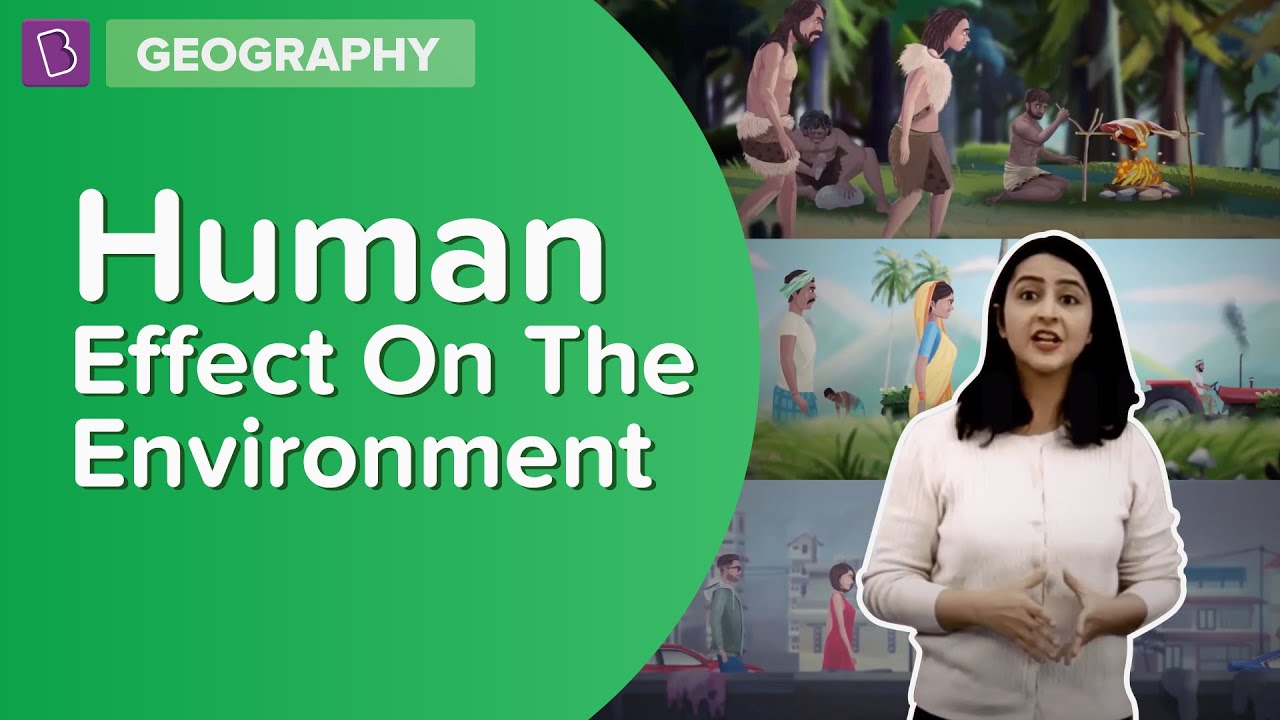 Fresh water of lakes and rivers is polluted by our chemical plants. This leads to an over-exploitation of resources. You Can Help Save Planet Earth for Future Generations We can all think of something we would like to change about the world, but it can often be challenging to act. Air pollution comes from sources like cars and factories that emit harmful chemicals into the atmosphere. We all know that Planet Earth is one of the most beautiful places in the universe. Extensive overuse of nonrenewable resources, like fossil fuels, can cause great harm to the environment.

How have human activities disrupted the natural ecosystem? 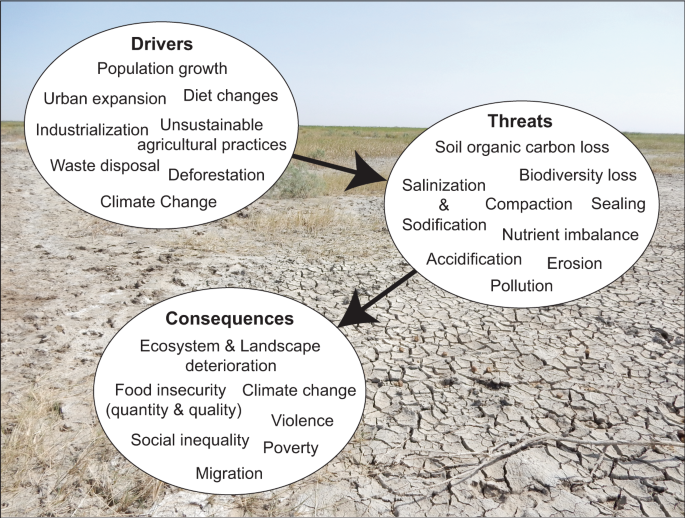 Which action could humans take to slow the rate of global warming? Our habits contribute to climate change and the warming of Planet Earth. How can ecosystems change? All of these contribute to the emission of greenhouse gases which trap heat energy in the atmosphere. Although the industrial activities of man provide basic need of the society, simultaneously the same release a lot of pollutants to the environment. See also 13 Dirty Ways in Which Tourism Contributes To Pollution It increases greenhouse gases within the atmosphere, which leads to further global warming. A science fiction writer, David has also has written hundreds of articles on science and technology for newspapers, magazines and websites including Samsung, About. 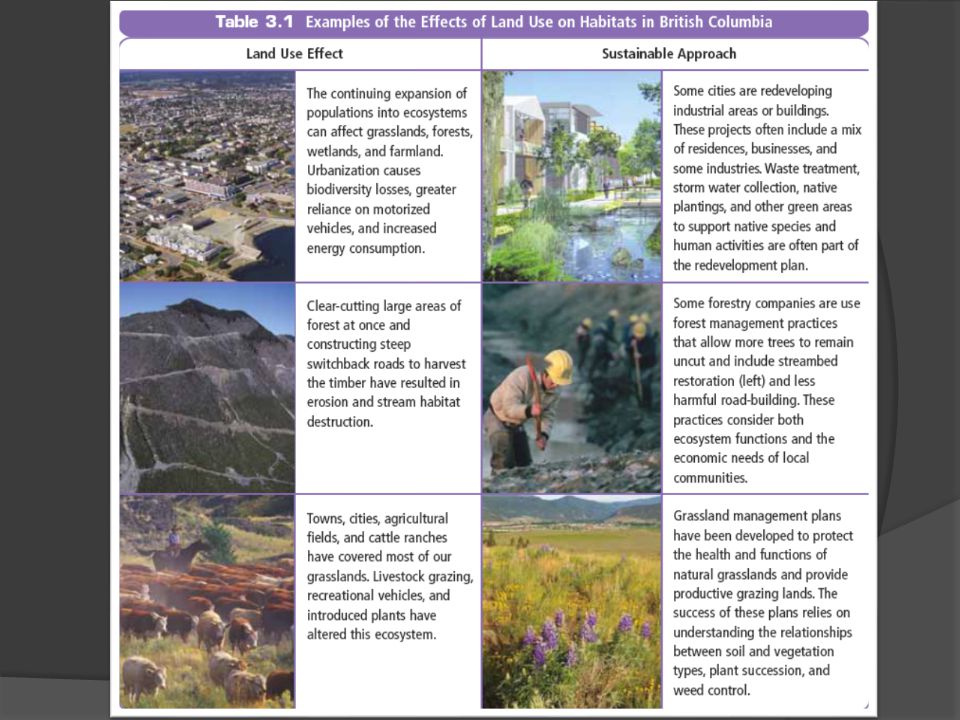 Going green helps the environment by reducing the amount of pollution that enters the soil, water and air. As the climate becomes warmer or cooler, the kinds of organisms that live in the area also change. These negative impacts can affect human behavior and can prompt mass migrations or battles over clean water. This can be devastating to existing species as invasive species are introduced on a timescale much more quickly than typically would happen with evolution over longer time periods. Humans impact the physical environment in many ways: overpopulation, pollution, burning fossil fuels, and deforestation. How does human activity affect ecosystem resistance and ecosystem resilience? How do human activities impact the diversity and stability of ecosystem? These organisms interact with each other in ways that are essential for their survival. And it will take the effort of all of us working together to change how we interact with Planet Earth.

How do natural and human activities change ecosystems? 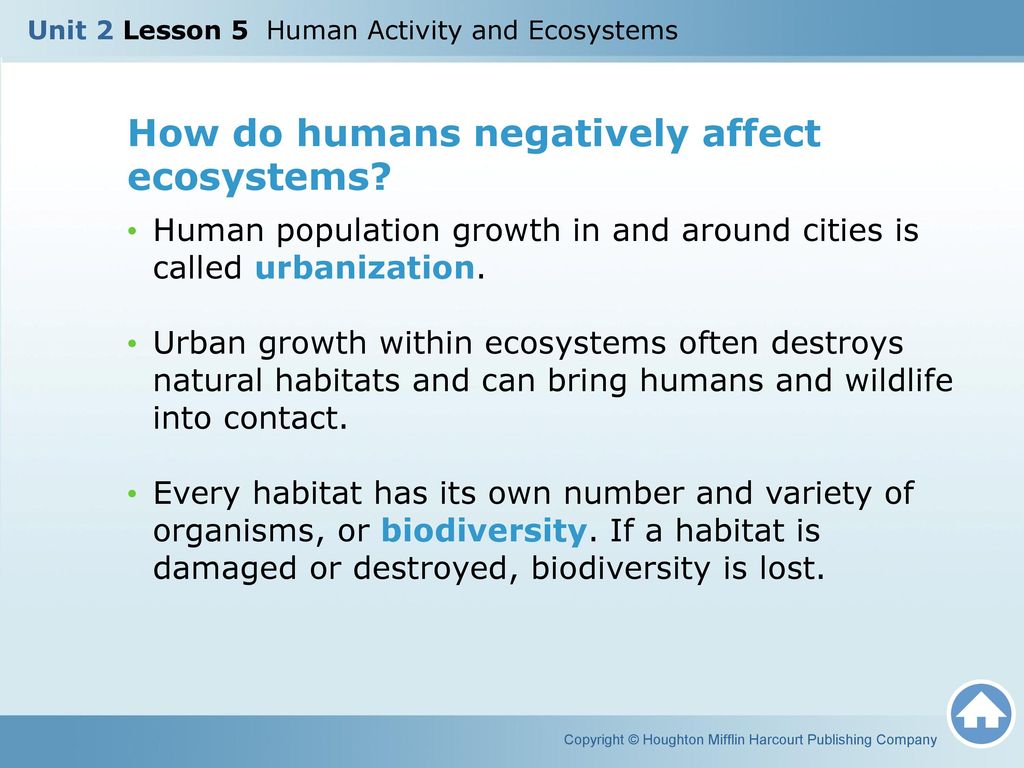 How does the overuse of water affect the ecosystem? Use public transport, cycle or walk instead of using a car. While it can be difficult to asees which pollutants are associated with specific effects on the environment or public health, it is generally accepted that air pollution can indeed cause public health problems and also harm plant and animal life. These tests result in an uncontrolled release of radioactive materials which have several harmful health effects on human, animals and the whole nature. Humans are already responsible for the extinction of countless species. With the growth of the human population, these impacts are amplified.

What are the effects of human activities on ecosystem?

As our population approaches 7 billion people, the effects of human activities on the ecosystem, including the water, air, land and the life that we share the world with, are almost immeasurable. Production of Black Carbon Black carbon particles have been generated by human activities for hundreds and hundreds of years. Humans use natural resources—whether for subsistence, trade, or other social, economic, and cultural activities. . Since the development of our cities and lifestyle, everything changed.

How do human activities impact on ecosystems?

This involved clearing tracts of land, domesticating On the other hand, the introduction of species where they do not naturally occur whether deliberately or by accident can cause competition with the native species. Water pollution: Human activities in respect of disposal of sewage wastes, solid wastes, municipal wastes, agricultural and industrial wastes cause the environment to be unfit for day to day use. Most of the direct drivers of degradation in ecosystems and biodiversity currently remain constant or are growing in intensity in most ecosystems see Figure 4. Land-use change: Humans may destroy natural landscapes as they mine resources and urbanize areas. Black carbon has also changed weather patterns and reduced rainfall in West Africa and South Asia, according to various scientific reports. Often they thrive in their new ecosystems, surviving and reproducing better than native species. Humans impact the physical environment in many ways: overpopulation, pollution, burning fossil fuels, and deforestation. 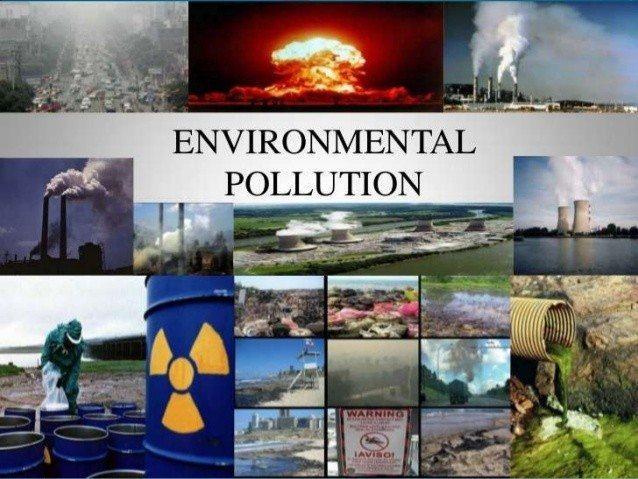 What is the positive and negative changes in the environment? The ecosystems on Planet Earth have provided us with many benefits, from food and medicine to protection from infectious diseases and other health risks. HABITAT LOSS AND EXTINCTION Wildlife conservation is becoming tougher because their natural habitat is constantly being threatened and destroyed. The widespread loss of Additionally, while our technology has advanced such that our food and medicine can increase the lifespan of humans, the challenges caused by human overpopulation increased as well. How are humans destroying food chain? Volunteer for cleanups in your community. Humans have always been a part of nature and have often influenced the ecosystem. The protection of threatened species and habitats is done by preventing or regulating potentially destructive human activities such as hunting, mining, and logging and by promoting sustainable activities such as reforestation, ecotourism, and community-based resource management. Intensive agriculture is a leading cause on account of the large amounts of chemical fertilizers, herbicides and other agrochemicals that find a way into waterways. 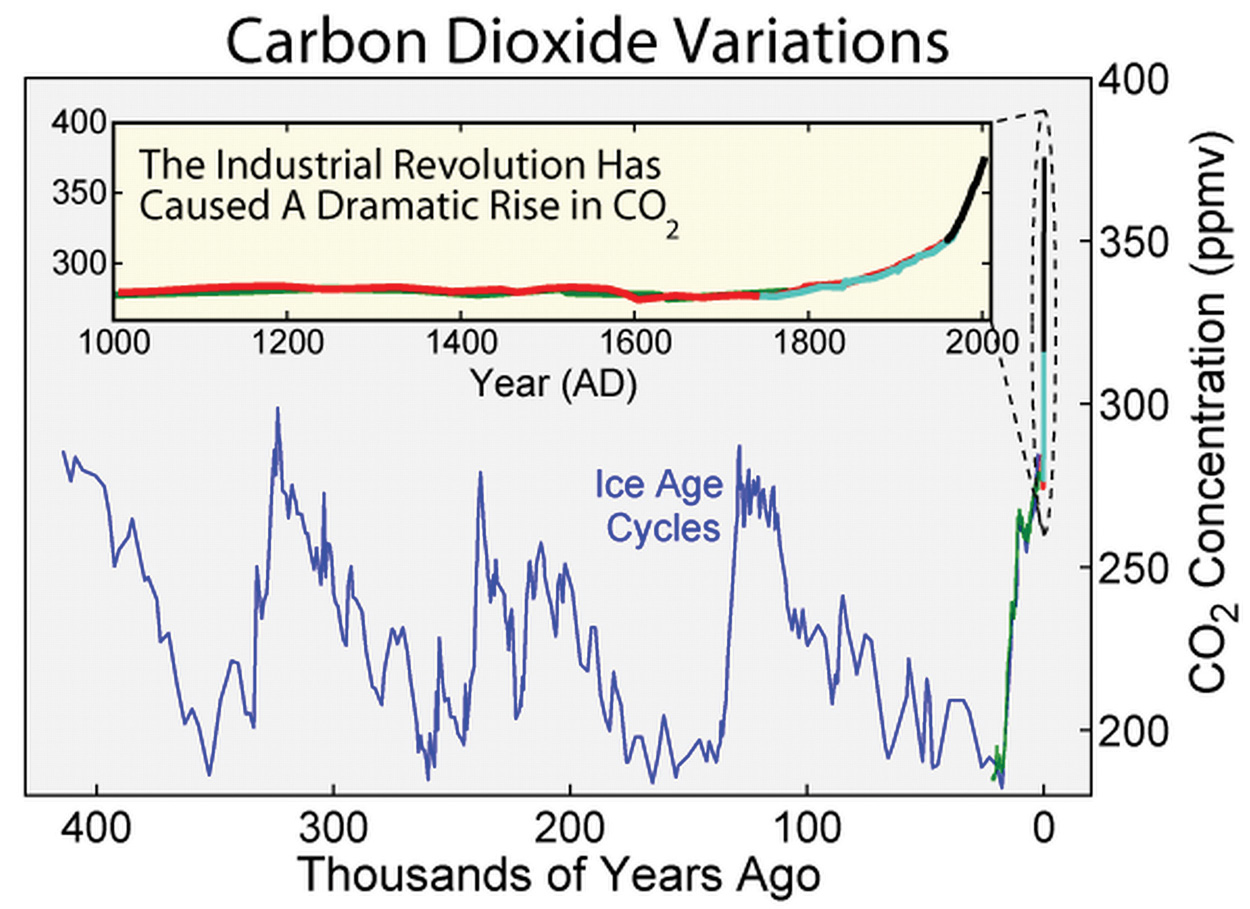 Pollution causes global warming and climate change: 3 3. He later founded The Ocean Cleanup project to begin putting that technology to use. I love life and value the beauty in everything around us — both inside us and outside of us. How are humans destroying the ecosystem? Anthropogenic activities top the list as there are numerous This article outlines various human activities affecting an ecosystem. By using alternative energy sources and avoiding the burning of fossil fuels, recycling and reducing waste and driving more efficiently, fewer pollutants are released into the environment. What are the 4 human activities that destroy the ecosystem? The five major impacts humans have on the environment include deforestation, global warming, overharvesting, pollution, and agriculture. Pollution is one of the main causes of ecosystem destruction. 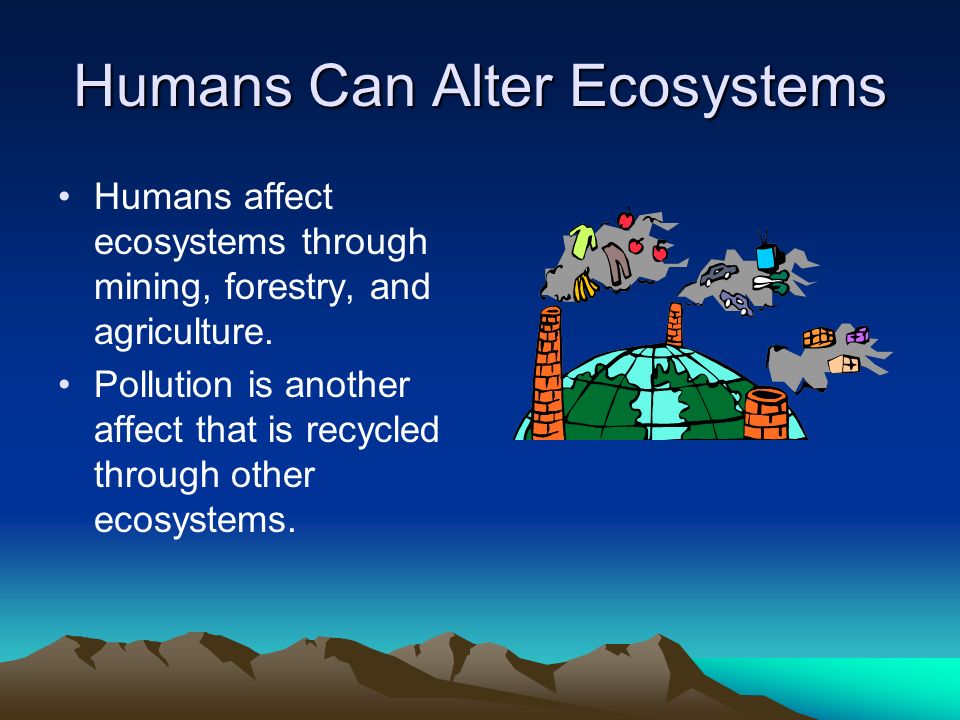 Conclusion From farming to fishing and driving, humans use resources that influence the ecosystem. It may even reduce mortality, according to scientists such as public health researchers Stamatakis and Mitchell. How can humans improve the environment? Human Activity Does Affect the Ecosystem One of the major problems we have in our world today is the damage humans are causing to the ecosystem. Ecosystems provide a variety of benefits to people, including provisioning, regulating, cultural, and supporting services. Protecting endangered species and cleaning lakes and seas has a positive effect on the environment. Why is nature so important? For example, continued use of herbicides, like glyphosate, has caused many weeds to become immune to their effects. Why are humans very important in the environment? Besides, polluted water spreads or leads to different diseases.

How do humans affect the ecosystem? 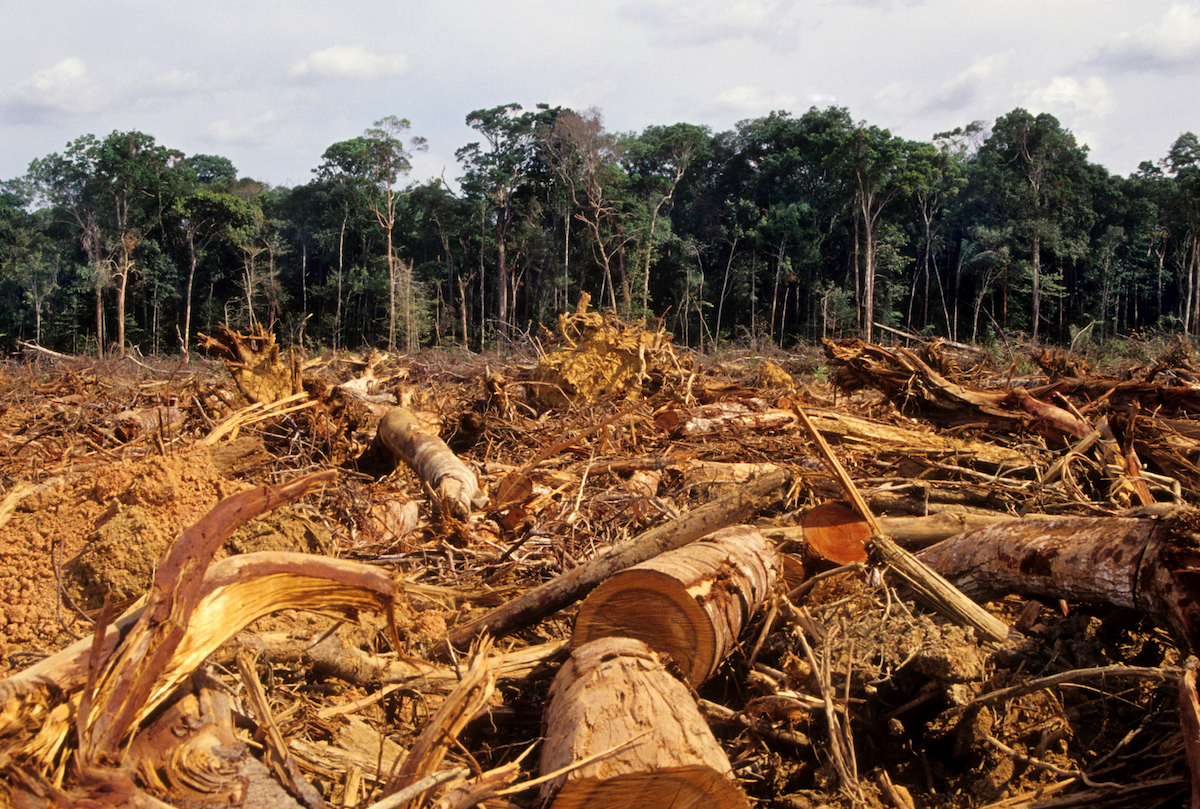 Habitat loss and destruction which is caused by deforestation, overpopulation, pollution, and global warming is a major cause of biodiversity loss. Fossil fuels include coal, oil, and natural gas. The destruction of natural habitat along with environmental and global warming, poaching, pollution, and deforestation are some of the leading causes of this tragedy. Air pollution can damage crops and trees in a variety of ways. Scientists focus extensively on estimating the level of human engagement to the occurrence of natural disasters.