Memory trace decay, also known as forgetting, is a natural process that occurs in the human brain. It refers to the gradual loss of information from our memory over time. This process can be influenced by a number of factors, including the passage of time, the amount of information we are trying to remember, and the level of emotional attachment we have to the information.

One of the main theories of memory trace decay is known as the "decay theory." This theory suggests that memories are stored in the brain as neural pathways, which can weaken and fade over time if they are not regularly accessed or reinforced. Essentially, the more we use and think about a memory, the stronger it becomes in our brains. If we don't think about a memory for a long time, the neural pathways associated with it may weaken, making it more difficult to retrieve the information.

Emotional attachment can also play a role in memory trace decay. Research has shown that memories that are associated with strong emotional experiences are often more memorable and less prone to decay. This is because the emotional component of the memory activates the amygdala, a part of the brain that is involved in emotional processing and memory consolidation.

While memory trace decay is a natural process that we all experience, there are ways to help improve and maintain our memories. One of the most effective strategies is to practice active recall, which involves intentionally trying to retrieve information from memory rather than simply re-reading or reviewing it. Other strategies include using mnemonic devices, such as acronyms or visual aids, to help encode and organize information, and engaging in activities that challenge the brain, such as puzzles or learning a new skill.

In conclusion, memory trace decay is a natural process that occurs in the human brain, but it can be influenced by a number of factors, including the passage of time, the amount of information we are trying to remember, and the level of emotional attachment we have to the information. While it is inevitable that we will forget some things over time, there are strategies we can use to help improve and maintain our memories. This theory is pretty solid and has stood the test of time. This idea suggests that information in long term memory may become confused or combined with other information during encoding thus distorting or disrupting memories. Encoding failure prevents us from remembering information because it never made it into long-term memory in the first place. Experiment 2 further explored single trial forgetting. Forgetting therefore occurs because the information is not physically available for retrieval. For example, words may be printed, spoken or sung, they may be presented in meaningful groups - in categories such as lists of animals or furniture - or as a random collection without any link between them. 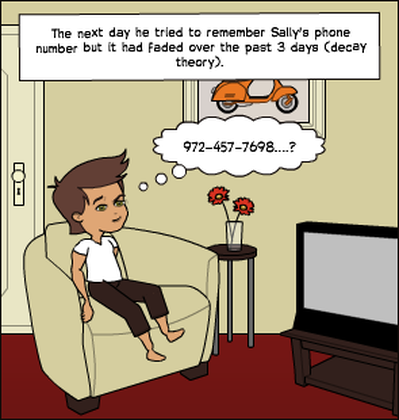 Which of these theories of forgetting is correct? As time goes on, these traces start to fade, or decay, and we can no longer access them. However, as Baddeley 1997, p. Since you don't actually need to know what the back of a penny looks like to differentiate it from other coins, you only really focus on the information you do need—the overall size, shape, and color of the coin. There are many ways in which a memory might fail to be retrieved, or be forgotten. The term consolidation was coined by Georg Elias Muller and Alfons Pilzecker in 1900. Is there any scientific support for the decay theory? The discriminability of item i, D i, when given the cue temporal location for stimulus j, C j, is given by Eq. 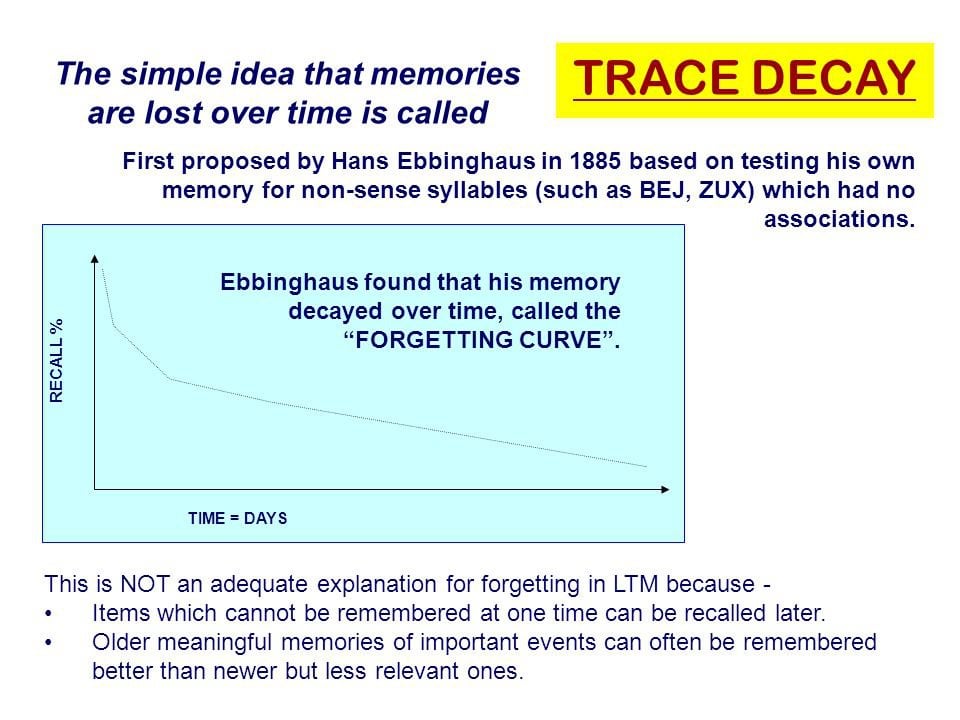 According to trace decay theory, forgetting should have been equal in the two conditions. Decay theory suggests memories are like traces. Information is therefore less available for later retrieval as time passes and memory, as well as memory strength, wears away. Ebbinghaus initially learned a list of nonsense syllables having little or no meaning. However, of interest in our understanding of the duration of the process of consolidation is HM's memory for events before his surgery. What is procedural memory? It grows stronger and less likely to be destroyed the more learning rehearsal takes place.

The Psychology of Forgetting and Why Memory Fails 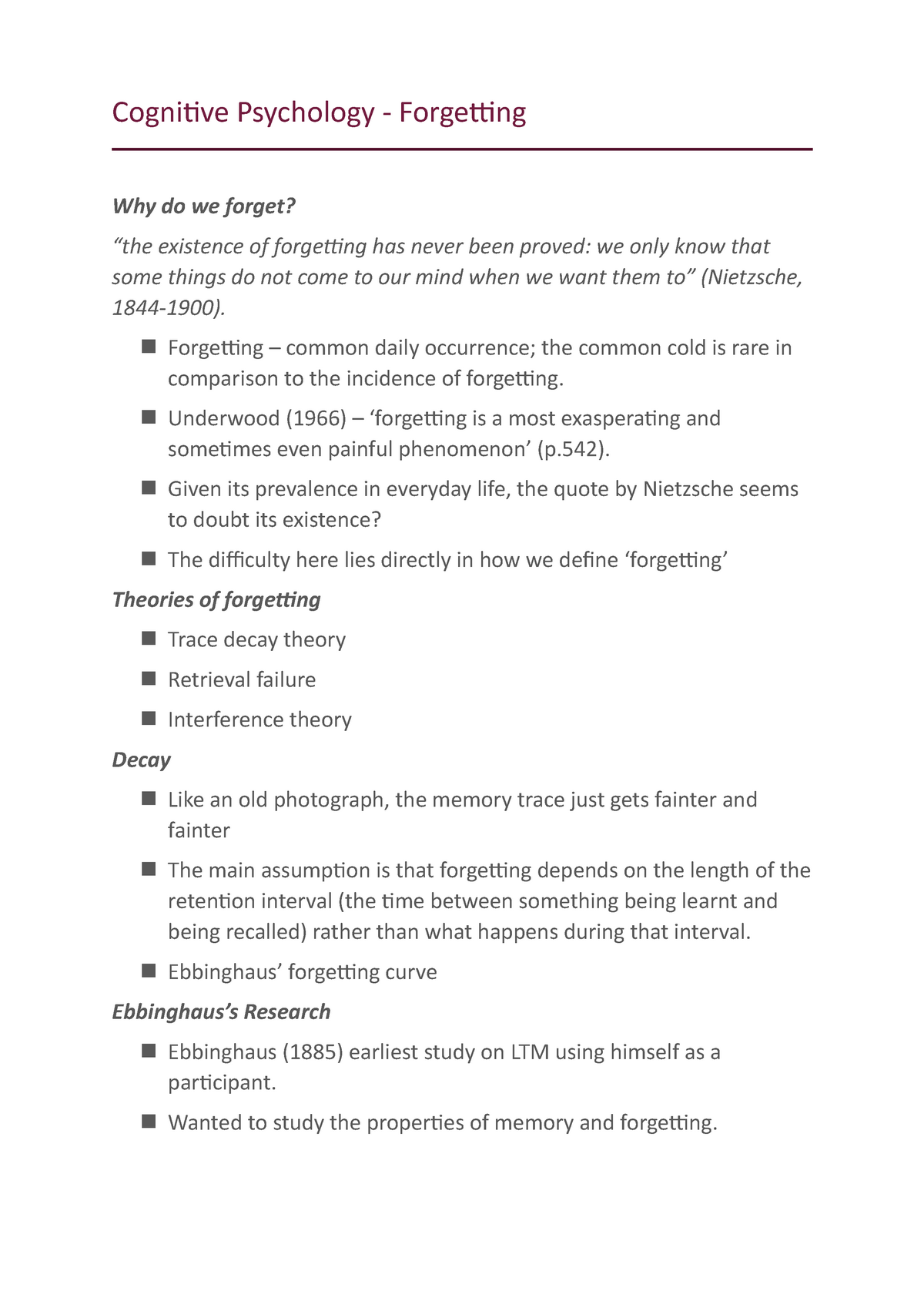 What causes forgetting according to decay theory? Throughout the years, psychologists have created five theories of forgetting in an attempt to explain how and why memories slip from our memories. For example, if someone tells you a joke on Saturday night after a few drinks, you'll be more likely to remember it when you're in a similar state - at a later date after a few more drinks. Such information is said to be available i. This cue will allow recollecting further details about the trip. Sometimes this might also mean we have a hard time recalling the immediate past. If all memory traces are subject to decay, it is perhaps surprising how well we can remember many events that happened several years ago and which are rarely thought about. Decay theory has long been rejected as a mechanism of long term forgetting. The performance decreased over trials, however, consistent with interference rather than trace decay. What are the 7 types of forgetting? The interference theory concentrates precisely on the aspects of forgetting that decay theory fails to address. Discussion The dominant account of the Equivalence between Decay and Interference Models? Some have suggested that we lose these memories because they might have been traumatic, and so we repress them. Four hundred twenty-four subjects recalled three-, five-, or seven-item lists of digits after 0, 3, 6, 9, 18, or 36 s. Infantile amnesia is the condition in which we cannot recall very early childhood events. Decay theory is a theory of forgetting.

This method might involve the use of free recall recalling items without hints or prompted recall utilizing hints to trigger memories. This is an example of retroactive interference. Another evaluative point is that it is supported by research conducted by Penfield who found that different memories could be appear in epileptic patients by probing different areas of the brain showing that memories do have a physical structure. The psychology of learning and motivation Volume 2. They discovered that semantic approach was the most important feature out of all the processes. 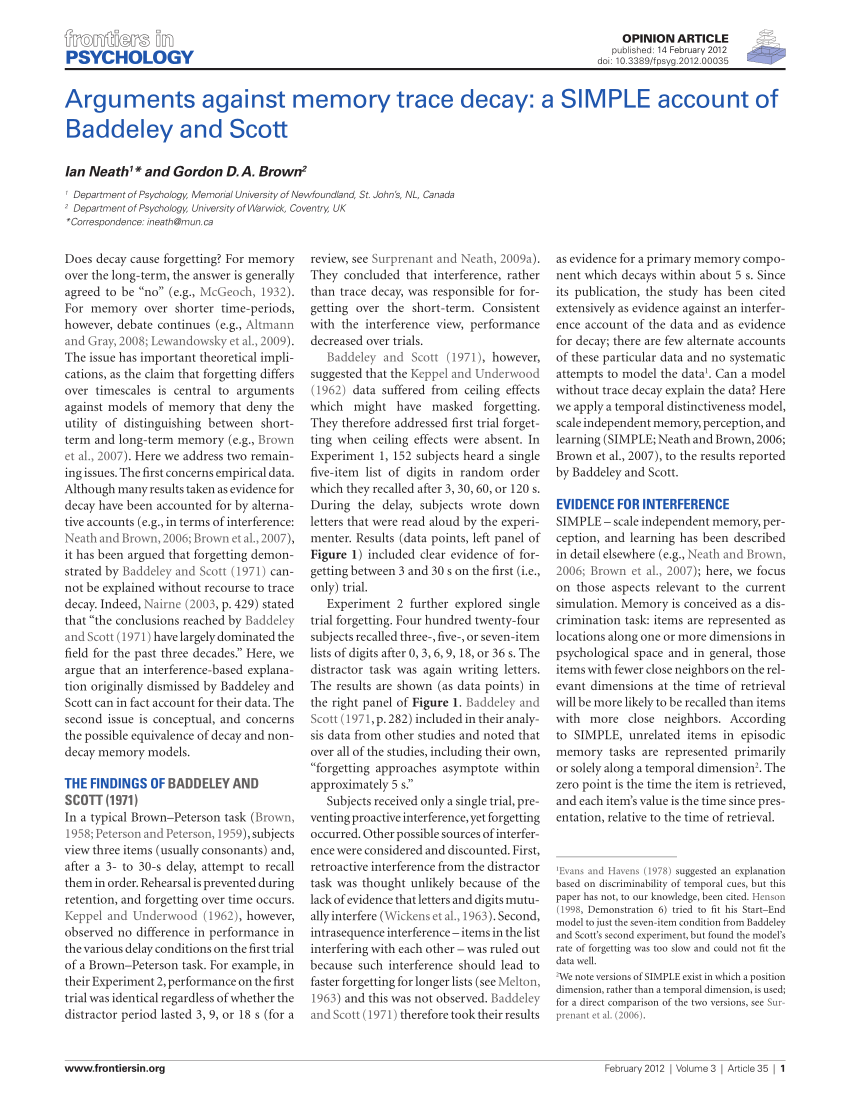 It is widely believed that neurons die off gradually as we age, yet some older memories can be stronger than most recent memories. Speed of recall of negative childhood memories by high-anxious, defensive high-anxious, low-anxious, and repressor groups. What causes us to forget? Amnesia Sometimes, though, we forget because we experience traumatic injuries to our brains, rather than simply the passage of time. They found that when people encoded information when drunk, they were more likely to recall it in the same state. What are the 4 theories of forgetting? It would be unnatural, then, to say that forgetting occurs due to decay.

What is passive decay?

Your high school graduation, wedding, and the birth of your first child are much more likely to be recalled because they are singular events—days like no other. The above is the same way SIMPLE has been applied to serial recall data in past demonstrations see There are thus three free parameters. It is the length of time the information has to be retained that is important. It grows stronger and less likely to be destroyed the more learning rehearsal takes place. Method: A lab experiment was used. This essay begins with a brilliant introduction, which provides accurate background information of Trace Decay Theory e.

What is storage decay?

In many situations, several of these explanations might account for why we cannot remember. Response to the question The student provides a thorough discussion of Trace Decay Theory including good description and evaluation points, referring to various psychology research studies to back up their points. Journal of Experimental Psychology, 58, 193-198 Pinel, J. The brain consists of a vast number of So if you can imagine a network of neurons all connected via synapses, there will be a pattern of stimulation and inhibition. The evocation of these past ghosts has the potential to incapacitate, drive to insanity, and kill an individual depending on the intensity and frequency of the memory. 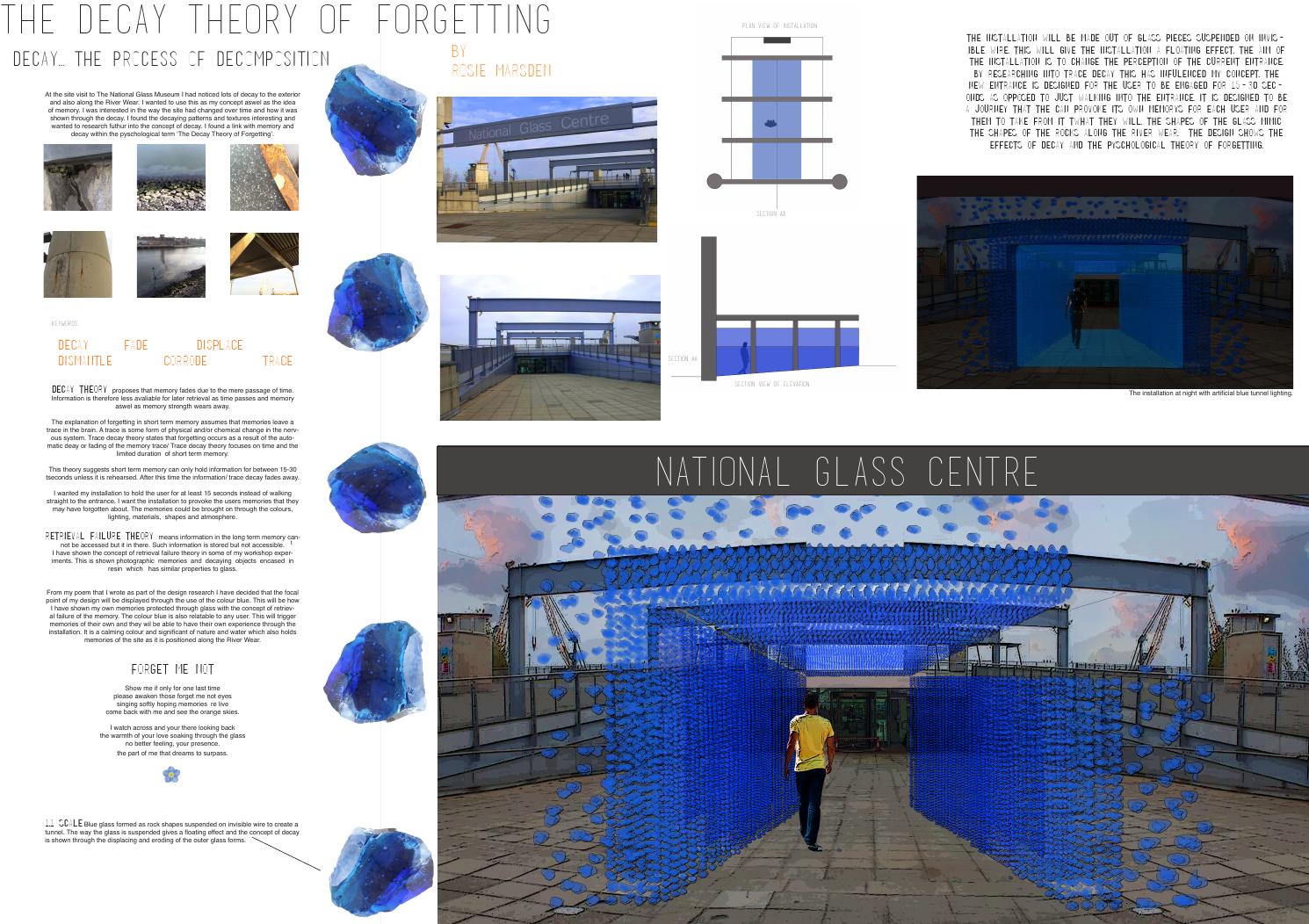 Extra-experimental sources of interference in forgetting, Psychological Review, 67, 73-95. Sometimes something bad happens to us and our brain tries to forget it. In other words, to investigate whether information you have recently received interferes with the ability to recall something you learned earlier. Having presented information participants will rehearse it. Lack of Consolidation The previous accounts of forgetting have focused primarily on psychological evidence, but memory also relies on biological processes. One of the problems with this theory is that it is difficult to demonstrate that time alone is responsible for declines in recall. Also called trace-decay theory.