Roman entertainment was a vital part of daily life in ancient Rome. It served as a means of recreation, distraction, and cultural expression for the Roman people. The Romans were known for their love of entertainment, and they had a variety of activities and events that they enjoyed.

One popular form of entertainment in Rome was the gladiatorial games, which were held in large amphitheaters such as the Colosseum. These games involved skilled fighters, often slaves or prisoners of war, who fought each other or wild animals in a combat spectacle for the enjoyment of the audience. The gladiators were trained in a variety of fighting styles, and their matches were often staged as mock battles between different nations or cultures. The gladiatorial games were a source of great entertainment for the Romans, and they were a popular form of public spectacle for hundreds of years.

Another popular form of entertainment in Rome was the theater. The Romans were avid theater-goers, and they had a number of professional theaters in their cities. These theaters were used to stage plays, comedies, and tragedies, and they were often very elaborate, with seating for thousands of spectators. Roman theater was heavily influenced by the Greek tradition, and many of the plays that were performed were adaptations of Greek works.

In addition to the gladiatorial games and theater, the Romans also enjoyed other forms of entertainment such as chariot racing, animal fighting, and sporting events. Chariot racing was a popular sport in Rome, and it was held in large stadiums called circuses. The Romans also enjoyed animal fighting, and they held events in which animals such as bears, lions, and elephants were pitted against each other or against human fighters.

Aside from these organized forms of entertainment, the Romans also enjoyed more informal activities such as socializing with friends, playing games, and engaging in recreational activities. They were particularly fond of board games and outdoor sports, and they had a number of public parks and gardens where people could relax and enjoy the outdoors.

Overall, Roman entertainment played an important role in the daily lives of the Roman people. It provided them with a way to relax, have fun, and escape the stresses of daily life. It also served as a way to celebrate their culture and traditions, and it helped to bring people together and foster a sense of community. 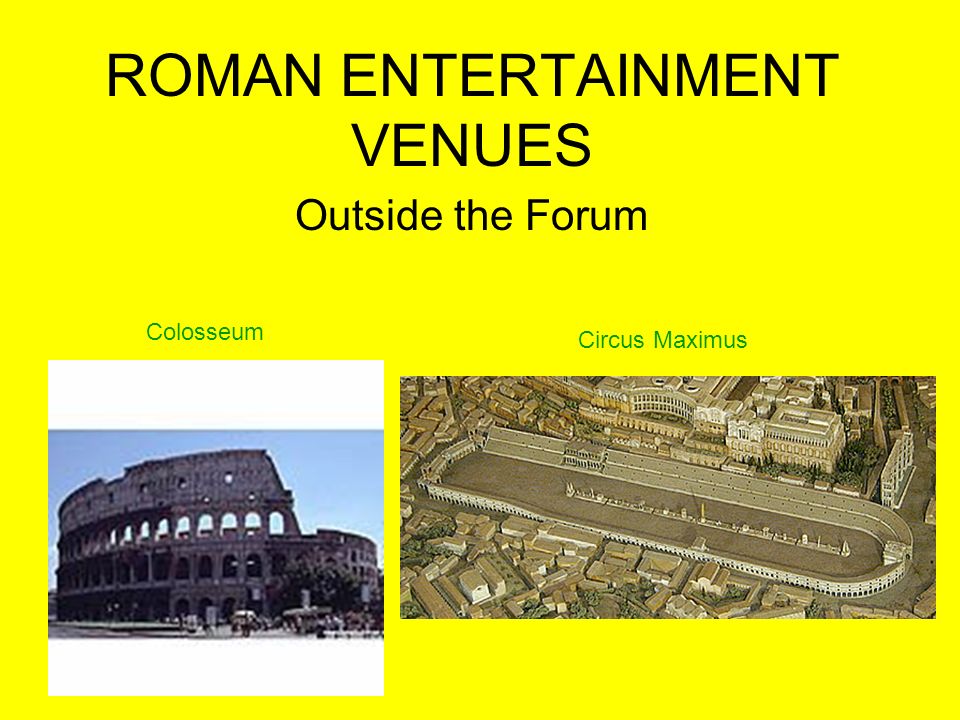 Apart from gladiatorial fights, the Romans also loved chariot races. Because there were no such things as boxing gloves, athletes tightly wrapped their hands in layers of cloth. The wealthy Romans had large playing fields and structures known as gymnasia and palaestrae in their villas. It is a battle against ourselves. It helps us build critical thinking skills and better our time management.

The Ancient Roman Architecture of Entertainment 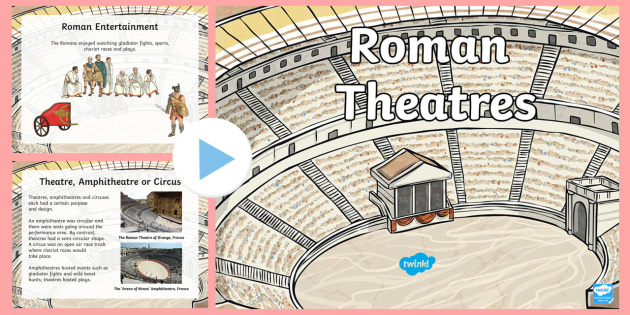 The idea is, little by little, to merge the conceptual approach and the real-life constraints. Violence was omnipresent in bloody gladiatorial fights, which took place in colossal arenas — amphitheatres — in all major cities across the Roman world. Gladiators fighting with animals provided a lot of excitement. Each team was supported by its own set of trainers, veterinarians, blacksmiths, and carpenters. In this game, the main activity was throwing the dice, of course. For this reason, we participate in competitions in which we value our way of understanding architecture. In particular, our team thought that the existing way of working and domestic space intensifies the problems of the current capitalist society.

Roman entertainment: all you need to know about the most popular roman games and shows in Ancient Rome 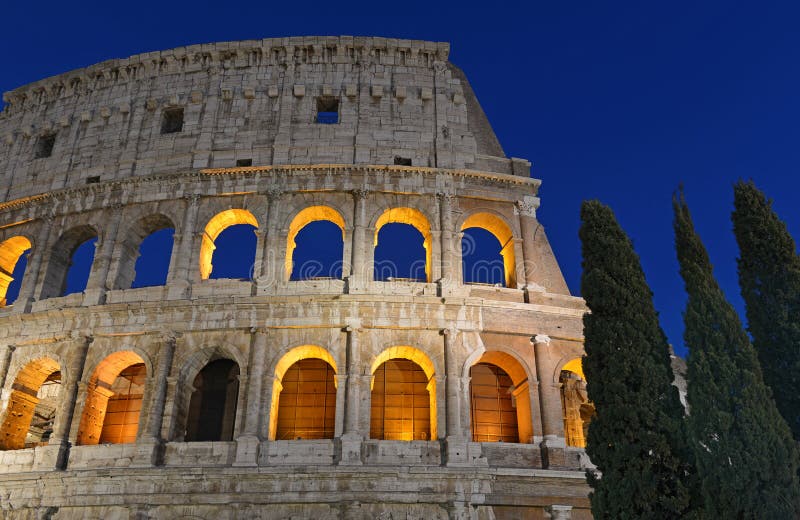 Thus, these already impressive buildings would remind visitors and passersby of Roman military triumphs and the achievements of their founders. Ancient Roman sports in summary Ancient Roman society put a lot of emphasis on physical fitness and agility. Theatrical performances were a popular for of roman entertainment and often took places on the same occasion of games, and in the same spaces. There was no time limit under the boxing rules of the time and exhaustion or giving up of one of the fighters ended the game. Roman theaters had permanent sets, a raised stage and tiers of seats for citizens that were shaped in a half-circle. The game is intended for two players and consists of a special, rosette board with eight boxes arranged in a circle with one central field connected to each field in a circle picture and two sets of pieces in two colours, three in each. And today we build sports stadiums using metal and concrete. 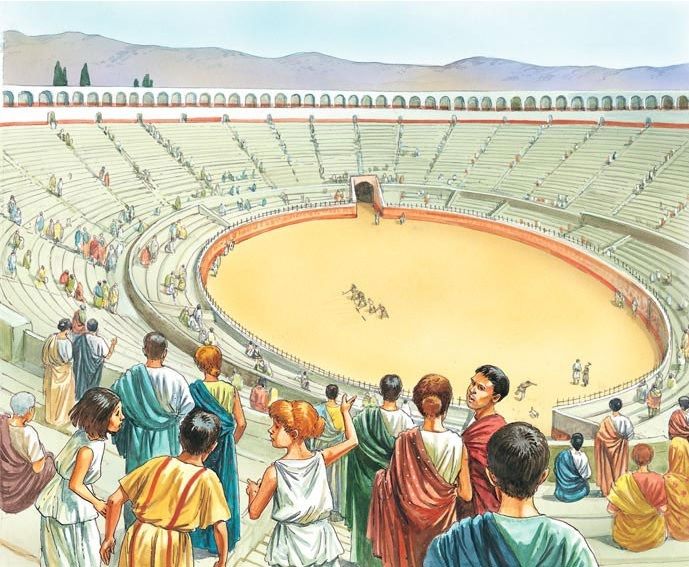 They were not regular and frequent entertainment, although they could last for many days. While theatres were popular in Ancient Rome, they were often temporary structures. Spectacle and Roman Politics Both the theatre and amphitheatre were an integral part of daily life in ancient Rome but they were more than mere entertainment venues. Wild cats, buffaloes, bears and elephants would all be kept in cages and made to fight each other - some animals even died out because they were so in demand by entertainment organisers. The bones of the Colosseum remain sturdy enough to house millions of visitors a year, even though the interior sheathing of coloured marble that would have been in place in its hay day has unfortunately disappeared. The last gladiator game happened in 404 A. They both have tier seating, have an oval shape and are both huge open air entertainment buildings.

I entered so that I could regain some autonomy over the type of design practice I wish to engage in. Designers are asked to communicate an idea visually in a concise and compelling fashion. Ancient Roman architecture has a lot of characteristics of Greek structures. It is an exciting time to open ourselves to new subjects, new landscapes, and new practices. As happened in many other sports in Rome, this game was also a Romanized version of the previously existing Greek game called phaininda. Emperor Nero ruled Rome from 37 AD to 68 AD and it was during his reign that large-scale state patronage of sports began. Most likely Romans used three cubes, while the Greeks used two. 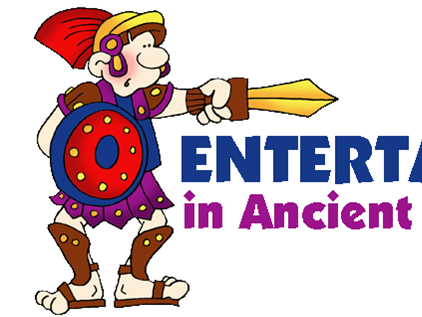 The possibilities for great entertainment will be infinite. We integrate this time into an internal research process, more global and transversal than the usual pragmatic practice of an agency. These were magnificent because they would flood the arena floor so that ships would sail in it and the ships would fight. What could be more exciting than this? Using it as an expression of art, I am free to push all boundaries and really find that which lights me up. However the Romans adapted their own ideas, styles and it soon appeared in the architecture in many other countries. The games were held mostly in the coliseums which were enormous in size and structure. Competitions give you the opportunity to think of new things and it will motivate you to work on them.

This Birdhome competition is actually the only one we have done in the past two years. Open competitions have an important democratic function in helping young architects to show their work. Often, there are aspects of the architecture tasks that are unfamiliar to us, which gives us the opportunity to learn something new. Spectators from all walks of life loved live shows and Emperors quickly understood the prestige and power that could come from giving people the entertainment they craved. Live Talk Radio Show? As designers early in our architectural careers, competitions allow us the opportunity to not only lead projects but refine our ethos and experiment with its application. Expand our horizons and communicate with professionals.

Some citizens of Rome would volunteer to become gladiators in order to make money. The Gauls lived in cottages and villas. Another difference is that material used to build the entertainment structures. Gladiator combats were shows where professionals would fight in front of a crowd. Competitions such as SKYHIVE provide us with an opportunity to work outside traditional requirements, while also with constraints that challenge us to be innovative in creating solutions. Those restrictions enable at the same time a different form of freedom and challenge for the creative process. These usually took place in the palaestra or sphaerista ball-courts.