The Federalist No. 78, also known as "The Judiciary Department," is an essay written by Alexander Hamilton, one of the Founding Fathers of the United States, as part of The Federalist Papers. In this essay, Hamilton discusses the role and importance of the judiciary branch of the U.S. government, and how it serves as a check and balance on the other two branches: the legislative and the executive.

Hamilton begins by stating that the judiciary is the "least dangerous" branch of government, as it has "neither force nor will, but merely judgment." This means that the judiciary does not have the power to enforce its decisions or carry out actions, but rather, it relies on the other branches to carry out its judgments.

He goes on to argue that the independence of the judiciary is essential to the preservation of a free society, as it ensures that the laws are applied and interpreted impartially and without bias. Hamilton also asserts that the judiciary serves as a "bulwark of a limited Constitution" by serving as a check on the power of the other two branches.

Hamilton also addresses the concern that the judiciary may become too powerful, and suggests that the system of checks and balances built into the U.S. Constitution, as well as the appointments process for judges, serves to prevent this from happening. He also notes that the judiciary's lack of force and will, as well as its reliance on the other branches to carry out its judgments, helps to ensure that it remains a limited and powerless branch of government.

In conclusion, The Federalist No. 78 is an important essay that highlights the importance of the judiciary in maintaining a free and just society. Hamilton's arguments in favor of the independence of the judiciary and its role as a check on the power of the other branches continue to be relevant today, and serve as a reminder of the crucial role that the judiciary plays in upholding the principles of the U.S. Constitution.

No. 78. The Judiciary Department

Life tenure, modified by good behavior, is a superb device for assuring judicial independence and protection of individual rights. The benefits of the integrity and moderation of the judiciary have already been felt in more States than one; and though they may have displeased those whose sinister expectations they may have disappointed, they must have commanded the esteem and applause of all the virtuous and disinterested. A constitution is, in fact, and must be regarded by the judges, as a fundamental law. The judiciary, on the contrary, has no influence over either the sword or the purse; no direction either of the strength or of the wealth of the society; and can take no active resolution whatever. It is a rule not enjoined upon the courts by legislative provision, but adopted by themselves, as consonant to truth and propriety, for the direction of their conduct as interpreters of the law. Whoever attentively considers the different departments of power must perceive, that, in a government in which they are separated from each other, the judiciary, from the nature of its functions, will always be the least dangerous to the political rights of the Constitution; because it will be least in a capacity to annoy or injure them. What is the weakest branch of military? Additionally, that a judiciary with life terms is necessary for the independence of that branch from the others. So, each branch must hold themselves and each other accountable to it. There is yet a further and a weightier reason for the permanency of the judicial offices, which is deducible from the nature of the qualifications they require. They must merely hope that the executive will see to it that their rulings are upheld. .

Federalist No. 78: The Judiciary Department 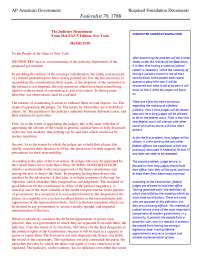 What was the purpose of Alexander Hamilton's Federalist No 78 quizlet? There is no position which depends on clearer principles, than that every act of a delegated authority, contrary to the tenor of the commission under which it is exercised, is void. It not uncommonly happens, that there are two statutes existing at one time, clashing in whole or in part with each other, and neither of them containing any repealing clause or expression. That inflexible and uniform adherence to the rights of the Constitution, and of individuals, which we perceive to be indispensable in the courts of justice, can certainly not be expected from judges who hold their offices by a temporary commission. He is pleased to note that to this organizational independence there is added a financial one. To the contrary most of the rules that shape our day to day behavior and outcomes have been perversely optimized or even expressly created by and for the benefit of the entrenched duopoly including all the actors surrounding the political industrial complex. There is yet a further and a weightier reason for the permanency of the judicial offices, which is deducible from the nature of the qualifications they require. Nor does this conclusion by any means suppose a superiority of the judicial to the legislative power. To deny this, would be to affirm, that the deputy is greater than his principal; that the servant is above his master; that the representatives of the people are superior to the people themselves; that men acting by virtue of powers, may do not only what their powers do not authorize, but what they forbid. WE proceed now to an examination of the judiciary department of the proposed government. This is true, but to interpret the laws and judge their constitutionality are the two special functions of the court. As to the tenure by which the judges are to hold their places; this chiefly concerns their duration in office; the provisions for their support; the precautions for their responsibility. Conclusion The Constitution clearly makes the judiciary the weakest branch. By a limited Constitution, I understand one which contains certain specified exceptions to the legislative authority; such, for instance, as that it shall pass no bills of attainder, no ex post facto laws, and the like. 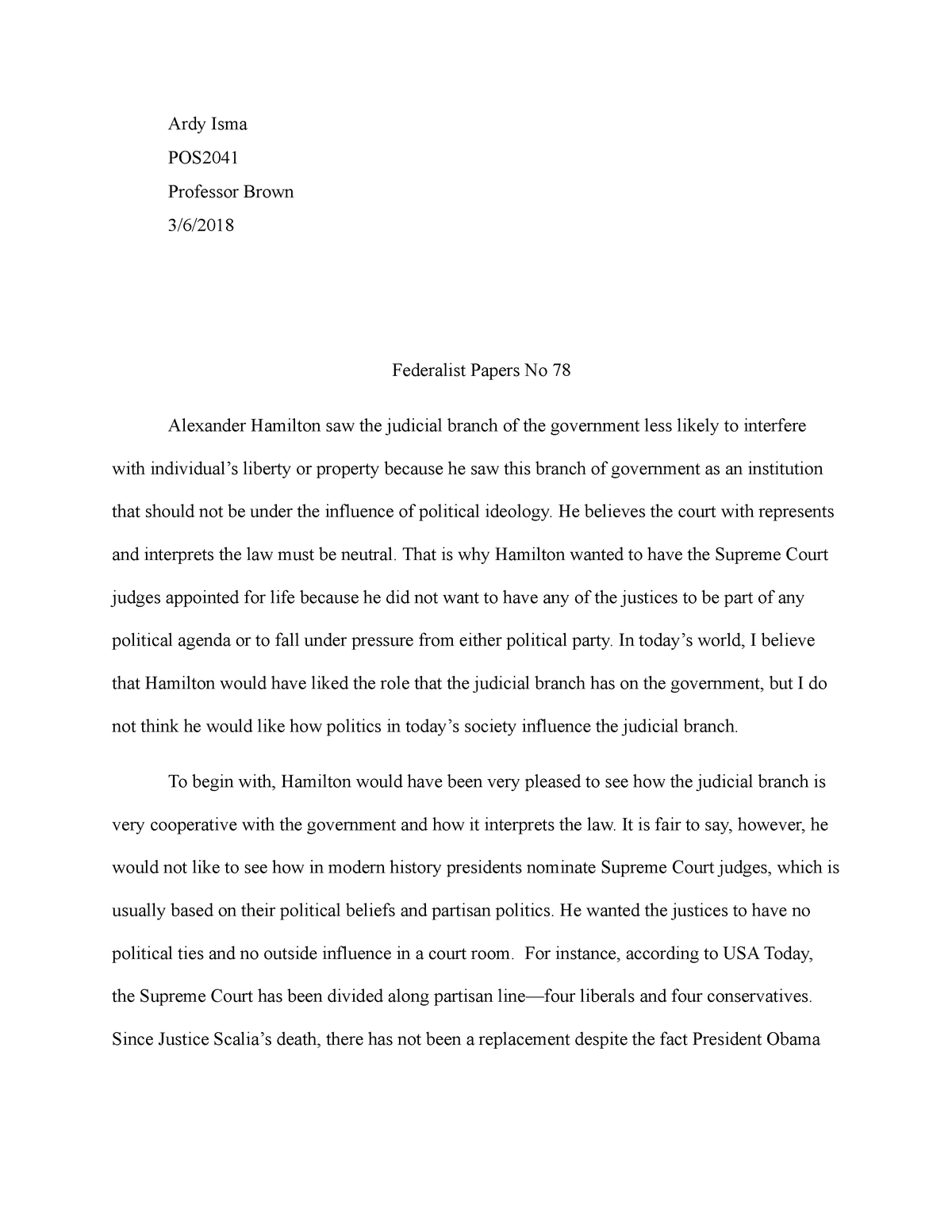 In the present circumstances of this country, and in those in which it is likely to be for a long time to come, the disadvantages on this score would be greater than they may at first sight appear; but it must be confessed, that they are far inferior to those which present themselves under the other aspects of the subject. If it be said that the legislative body are themselves the constitutional judges of their own powers, and that the construction they put upon them is conclusive upon the other departments, it may be answered, that this cannot be the natural presumption, where it is not to be collected from any particular provisions in the Constitution. Limitations of this kind can be preserved in practice no other way than through the medium of courts of justice, whose duty it must be to declare all acts contrary to the manifest tenor of the Constitution void. This principle of judicial review was affirmed by the Supreme Court in the case of Marbury v. It is far more rational to suppose, that the courts were designed to be an intermediate body between the people and the legislature, in order, among other things, to keep the latter within the limits assigned to their authority. Parallel to every denial of legislative power in essay seventy-eight goes an assertion of vested rights.

What are the main points in Federalist No 78? 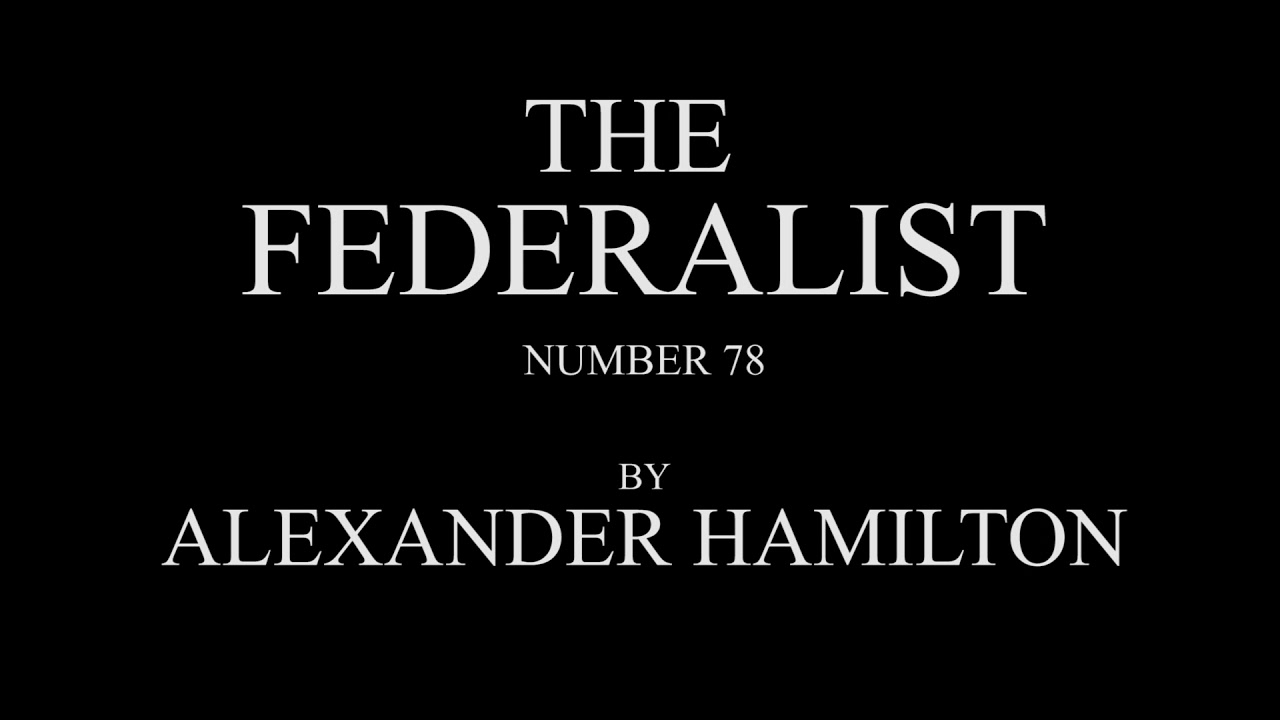 In fact I would wager that the concept is mythical and unenforceable. Hamilton made two principal points in the essay. In unfolding the defects of the existing Confederation, the utility and necessity of a federal judicature have been clearly pointed out. The emerging stage is where you can finance others, e. The rule which has obtained in the courts for determining their relative validity is, that the last in order of time shall be preferred to the first. 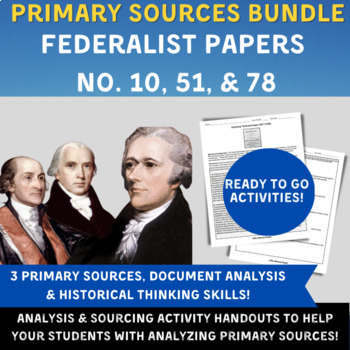 This is the battle against BIG centralized LOCAL government. Men placed in this situation will generally soon feel independent of heaven itself. It equally proves, that though individual oppression may now and then proceed from the courts of justice, the general liberty of the people can never be endangered from that quarter; I mean so long as the judiciary remains truly distinct from both the legislature and the Executive. In a monarchy it is an excellent barrier to the despotism of the prince; in a republic it is a no less excellent barrier to the encroachments and oppressions of the representative body. The Executive not only dispenses the honors, but holds the sword of the community.

The Federalist, Alexander Hamilton argued for judicial review by an independent judiciary as a necessary means to void all governmental actions contrary to the Constitution. The Constitution imposes certain restrictions on the Congress designed to protect individual liberties, but unless the courts are independent and have the power to declare laws in violation of the Constitution null and void, those protections amount to nothing. The manner of constituting it seems to embrace these several objects: 1st. In such a case, it is the province of the courts to liquidate and fix their meaning and operation. The legislature not only commands the purse, but prescribes the rules by which the duties and rights of every citizen are to be regulated. The Executive not only dispenses the honors, but holds the sword of the community. 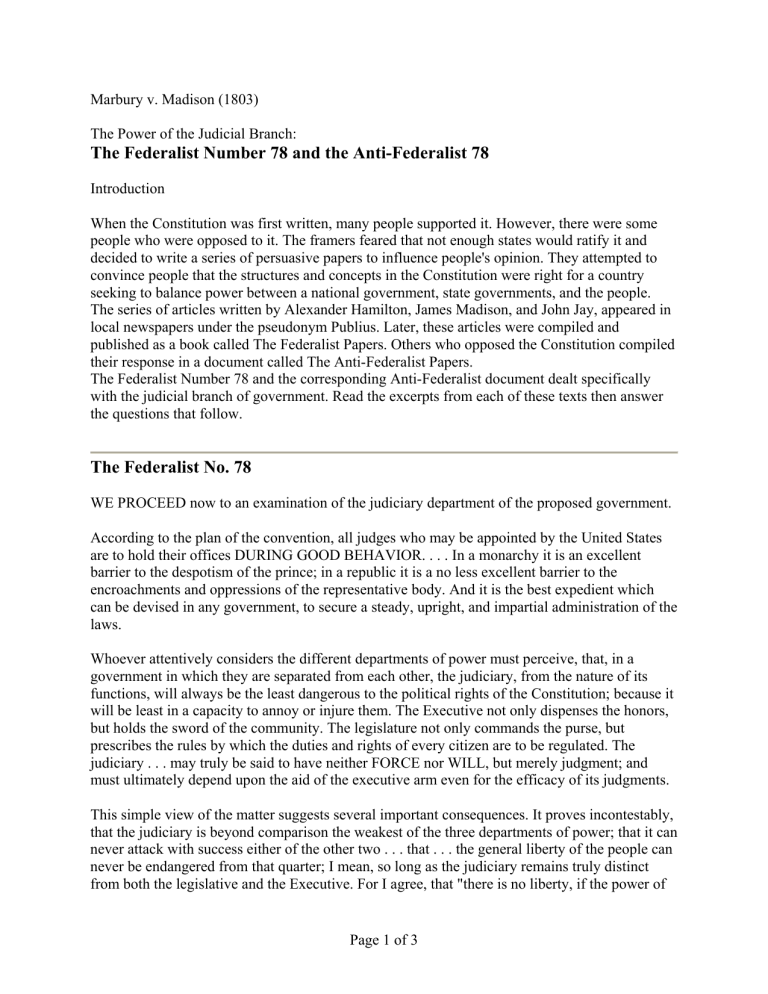 The abyss we are currently in is a result of the major parties have stopped competing over undecided voters and those in the middle and instead focused on a narrow gap of special interest and partisan voters. It not only serves to moderate the immediate mischiefs of those which may have been passed, but it operates as a check upon the legislative body in passing them; who, perceiving that obstacles to the success of iniquitous intention are to be expected from the scruples of the courts, are in a manner compelled, by the very motives of the injustice they meditate, to qualify their attempts. And every man must now feel, that the inevitable tendency of such a spirit is to sap the foundations of public and private confidence, and to introduce in its stead universal distrust and distress. Hamilton examines this argument, starting with the fact that only the Constitution is fundamental law. What does Hamilton mean when he says good behavior in Federalist 78? And making the proper deductions for the ordinary depravity of human nature, the number must be still smaller of those who unite the requisite integrity with the requisite knowledge. They ought to regulate their decisions by the fundamental laws, rather than by those which are not fundamental. .

What does Federalist No 78 talk about? â€“ Find what come to your mind 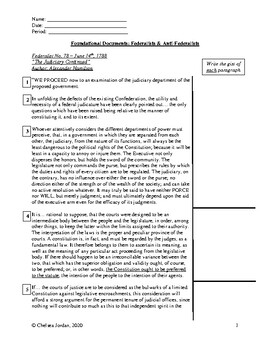 It is urged that the authority which can declare the acts of another void, must necessarily be superior to the one whose acts may be declared void. There is yet a further and a weightier reason for the permanency of the judicial offices, which is deducible from the nature of the qualifications they require. The judicial branch of government is by far the weakest branch. The rule which has obtained in the courts for determining their relative validity is, that the last in order of time shall be preferred to the first. The benefits of the integrity and moderation of the judiciary have already been felt in more States than one; and though they may have displeased those whose sinister expectations they may have disappointed, they must have commanded the esteem and applause of all the virtuous and disinterested. They are indeed feeble. The reasons for this vary from an essay being too lengthy to ensuring continuity from one document to the next.