Whistleblowing refers to the act of an employee or other individual disclosing information about illegal or unethical activities within an organization. This can include things like financial fraud, corruption, abuse of power, or violations of laws or regulations. Whistleblowing can be a difficult and risky decision, as it often involves going against the interests of one's employer or colleagues and can lead to negative consequences such as retaliation or even termination.

However, despite the risks, many people choose to blow the whistle because they believe it is the right thing to do. They see it as a moral obligation to expose wrongdoing and protect the public from harm. In this sense, whistleblowing can be seen as a form of ethical behavior.

One argument for the ethicality of whistleblowing is that it serves the greater good. By bringing attention to illegal or unethical activities, whistleblowers can help to prevent harm to others and promote a more just and fair society. For example, if a healthcare worker witnesses fraud or abuse within their facility, speaking out about it could help to protect the health and safety of patients. Similarly, if an employee of a financial institution witnesses fraud or mismanagement, blowing the whistle could help to prevent harm to investors and customers.

Another argument for the ethics of whistleblowing is that it can help to hold organizations accountable for their actions. When wrongdoing is exposed, it can result in consequences for the perpetrators and may lead to changes in policies or practices to prevent similar incidents from occurring in the future. This can help to promote transparency and integrity within an organization and can ultimately lead to a more ethical and responsible business environment.

However, it is important to recognize that there can be negative consequences for whistleblowers as well. They may face retaliation from their employer or colleagues, including being ostracized or even fired. This can be a major concern for whistleblowers, especially if they are not protected by laws or policies that safeguard their rights.

Despite these risks, many people believe that the ethical benefits of whistleblowing outweigh the costs. They see it as a way to stand up for what is right and to protect the public from harm. However, it is important for whistleblowers to carefully consider the potential consequences of their actions and to seek out support and resources to help them navigate any challenges that may arise.

In conclusion, whistleblowing can be seen as a form of ethical behavior because it serves the greater good and can help to hold organizations accountable for their actions. While it can be a risky and difficult decision, many people believe that the benefits of exposing wrongdoing outweigh the costs. It is important for individuals to carefully consider the potential consequences of their actions and to seek out support and resources to help them navigate any challenges that may arise.

Whistleblowing, Is It Ethical? 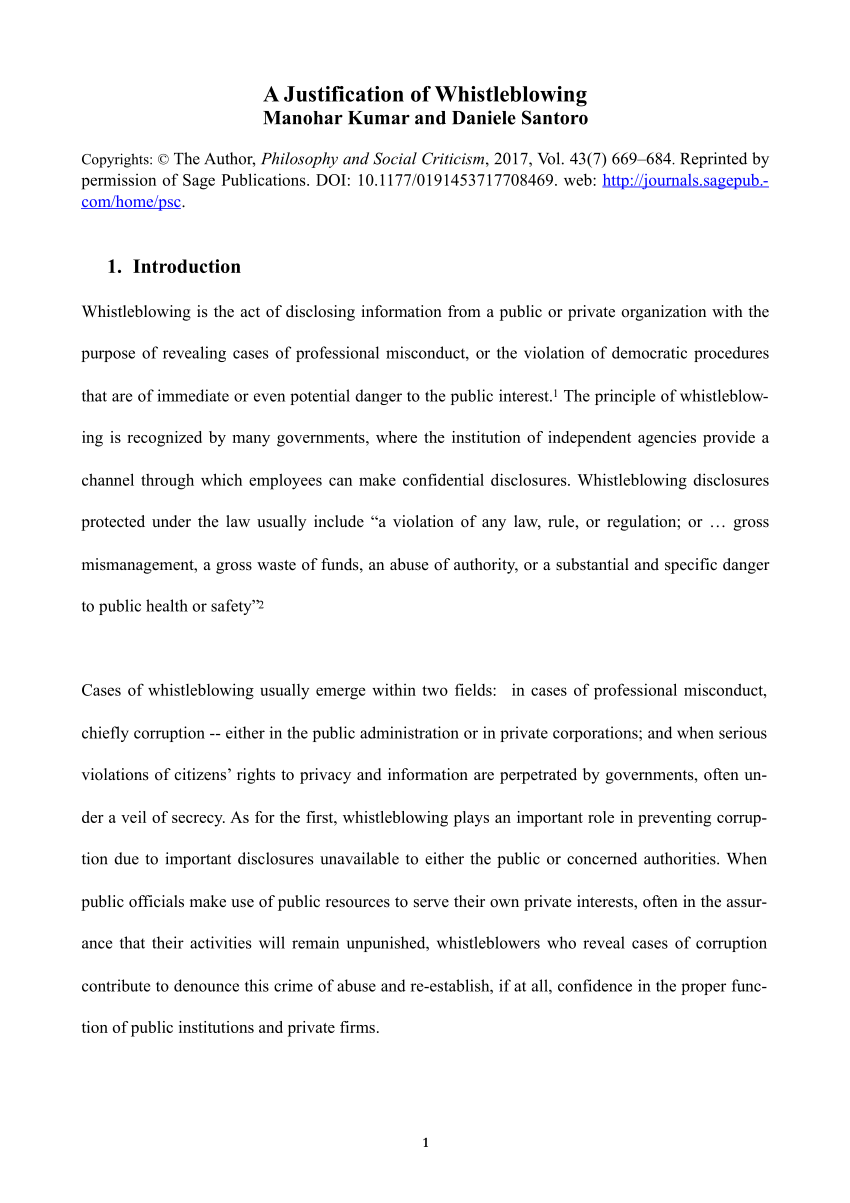 . . Another concern is the treatment that Snowden received and the example it shows to other people whose organizations may be doing something wrong, and they need to report. Educating students about personal ethics would also be helpful to them in the future. As mentioned above, consequentialism focuses on the consequences outcomes of the actions while deontology emphasizes on adhering to ethical duties.

Furthermore, from the incident, it is evident that the morals of individuals get washed down by the institutions in which they work in. . Wells Fargo sacked Bado for "tardiness. For instance, in the above example assume an employee has padded an expense account. Taking into consideration the fact that illegal or immoral actions of an organization might result in significant harm to society, whistleblowing could be considered an act of interference; therefore, its moral position should not be challenged. As well, they may struggle with a sense of disloyalty, where they inadvertently feel as if they are betraying their fellow colleagues or organisation if they report what they know.

Both of these situations are addressed in terms of the so-called public policy exception to the employment at will rule. Weinstein 1979 cited Keenan 1995, p. Stern then had to resort going to various media outlets to. Hence, based on all the above considerations, one can conclude that employees should have a duty to blow the whistle on misconduct. Unauthorised disclosures by public servants are treated as a breach of CECPS which lead to disciplinary …show more content… It was through the enactment of Whistleblower and Witness Protection Act WWPA of 2015 that aimed at promoting and facilitating the disclosure of information about organised crimes, corruption offences, and unethical conduct, illegal and dangerous activities as well as protecting a potential whistleblower and witness against retaliation.

Ignoring wrongdoing is an expected response since ignoring observed organizational problems is the standard or norm. However, speculations have arisen whether the employee has loyalty to the boss. Whistleblowing statutes with the dual purpose of protecting whistleblowers and encouraging whistleblowing have been passed in many states. Words: 1367 - Pages: 6 Premium Essay Whistleblowing and Ethics Helplines in the 1modes of Managing Morality Model. Business ethics can be defined as the study of proper business policies and practices regarding potentially controversial issues such as corporate governance, insider trading, bribery, discrimination, corporate social responsibility, and fiduciary responsibilities Investopedia.

An Ethical Analysis of Whistleblowing The identity perspective is an ideal framework to shed light on the individual-level motivations behind whistle-blowing. Overview of the Chapter This introductory chapter covers the background to the problem, statement of the problem, research major objective and specific objectives of the study. There may also be issues of lost revenue and a decrease in the market performance of the organisation. The CJC 1999, p. Chopra and his team acted ethically in coming out with the truth to help safeguard and protect the health of fellow Canadians.

Values and the Ethics of Whistleblowing 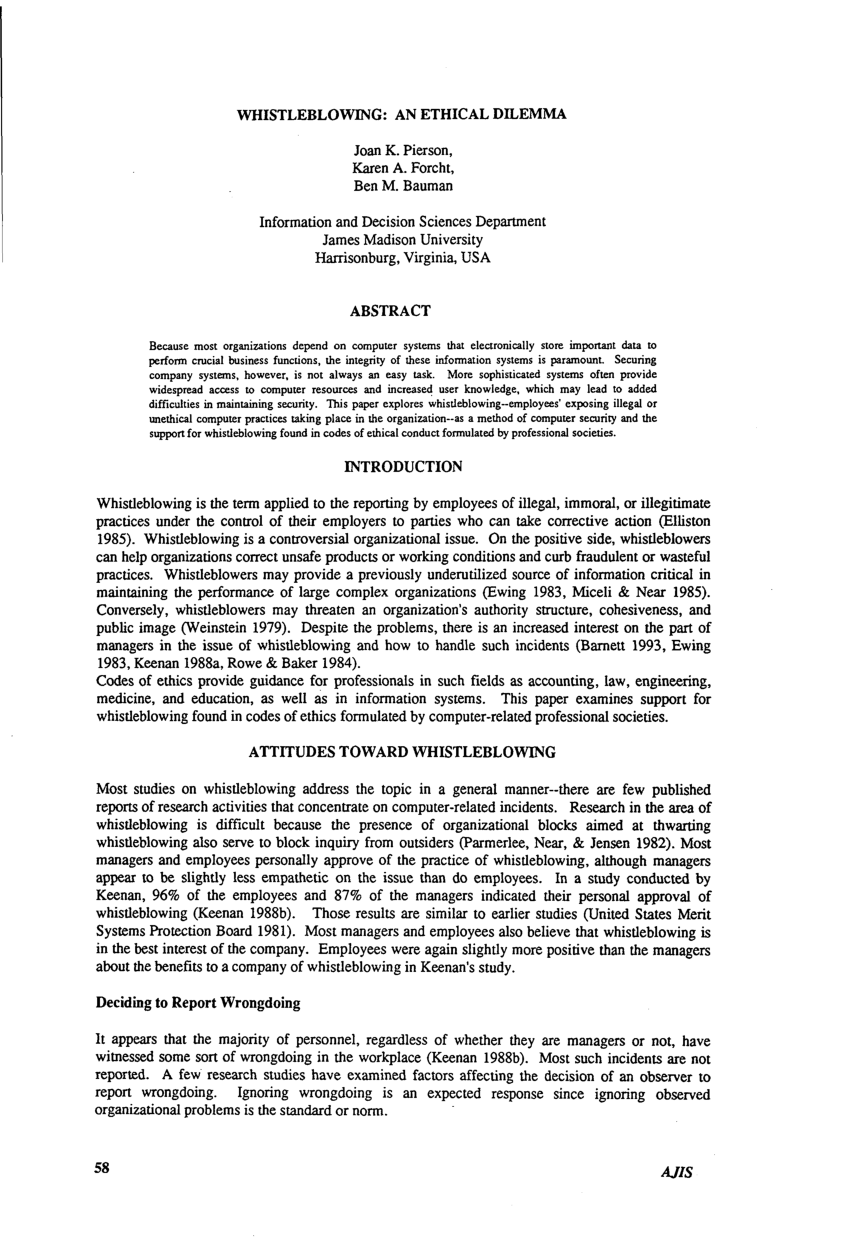 As a representation of the business and the employer, the employees Essay on Whistleblowing legal indices often listed the law of whistleblowing under the word "snitch" or "informant. The protection of whistleblowers from retaliation for reporting in good faith suspected acts of corruption and other wrongdoing is therefore integral to efforts to combat corruption, promote public sector integrity and accountability, and support a clean business environment. In my opinion, constant matching of ones values is impossible because the working process often requires mind flexibility which is significantly restricted by the priorities. Such information can be classified as a violation of company Whistleblowing an Advantage to the Organization WHISTLEBLOWING AN ADVANTAGE TO THE ORGANIZATION Prepared By: Abstract. It provides procedures for making a disclosure, stipulates responsibilities of the competent authority, and demands all disclosures to be treated with utmost Whistleblower Protection Research Paper 2272 Words 10 Pages Abstract Whistleblowing has now became an important aspect to organizations and it reflects governance aspect of the organization. 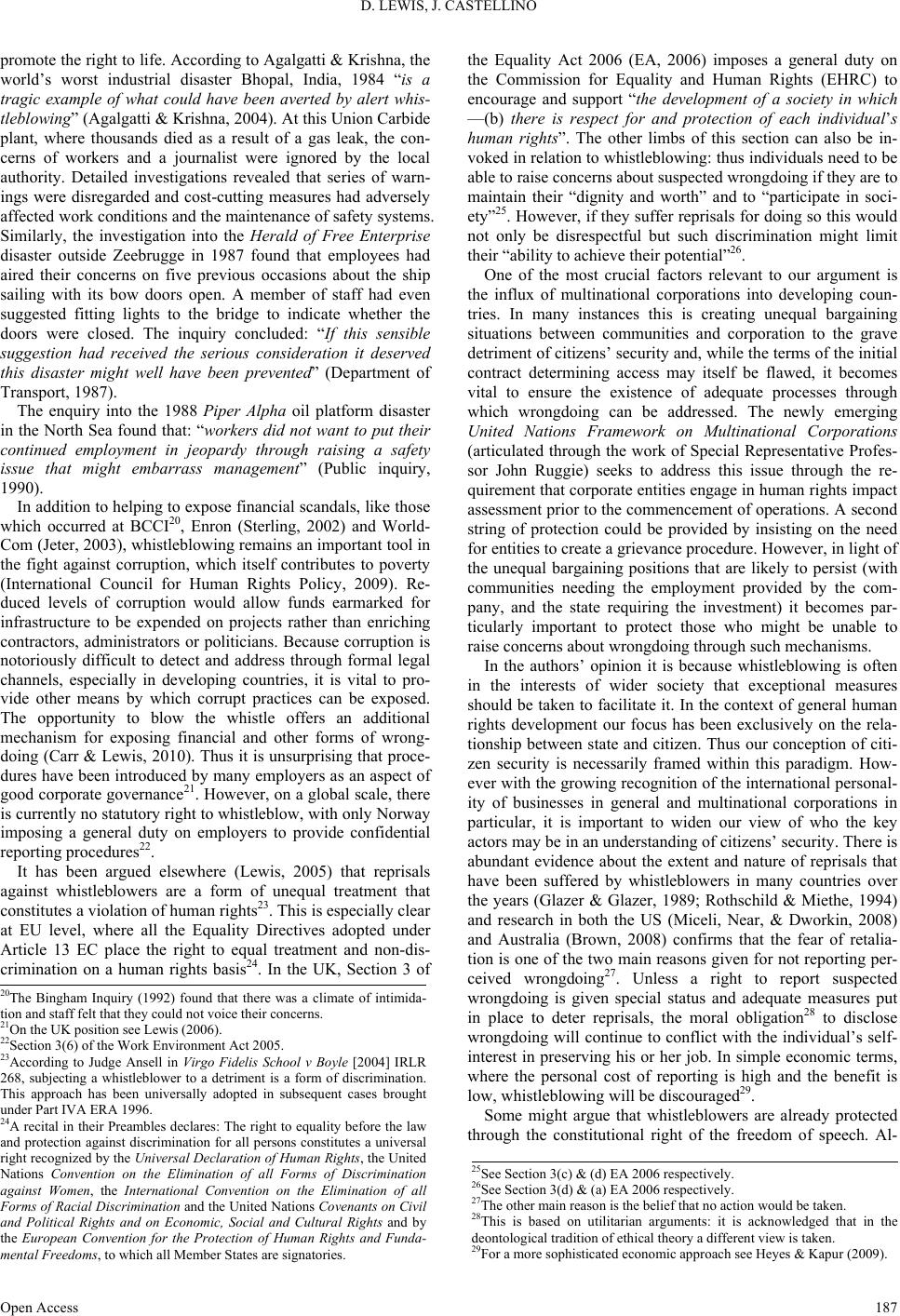 The indications are that the use of monetary incentives is not the most effective model to enforce whistleblowing as an effective deterrent, which can be supported by the poor statistical reception under the. This newfound information raises the question, is Mr. It is important to be integrity person to ensure the task or jobs are more honest and there is no abuse of power among the public or private employees. However, internal whistleblowing as an important instrument to eliminate ethical misconduct was ignored and not included in PLCE and CECPS. Whistleblowing Literature Review 992 Words 4 Pages 2. LiCari, a former director of research and development for Beech-Nut Nutrition Corporation. 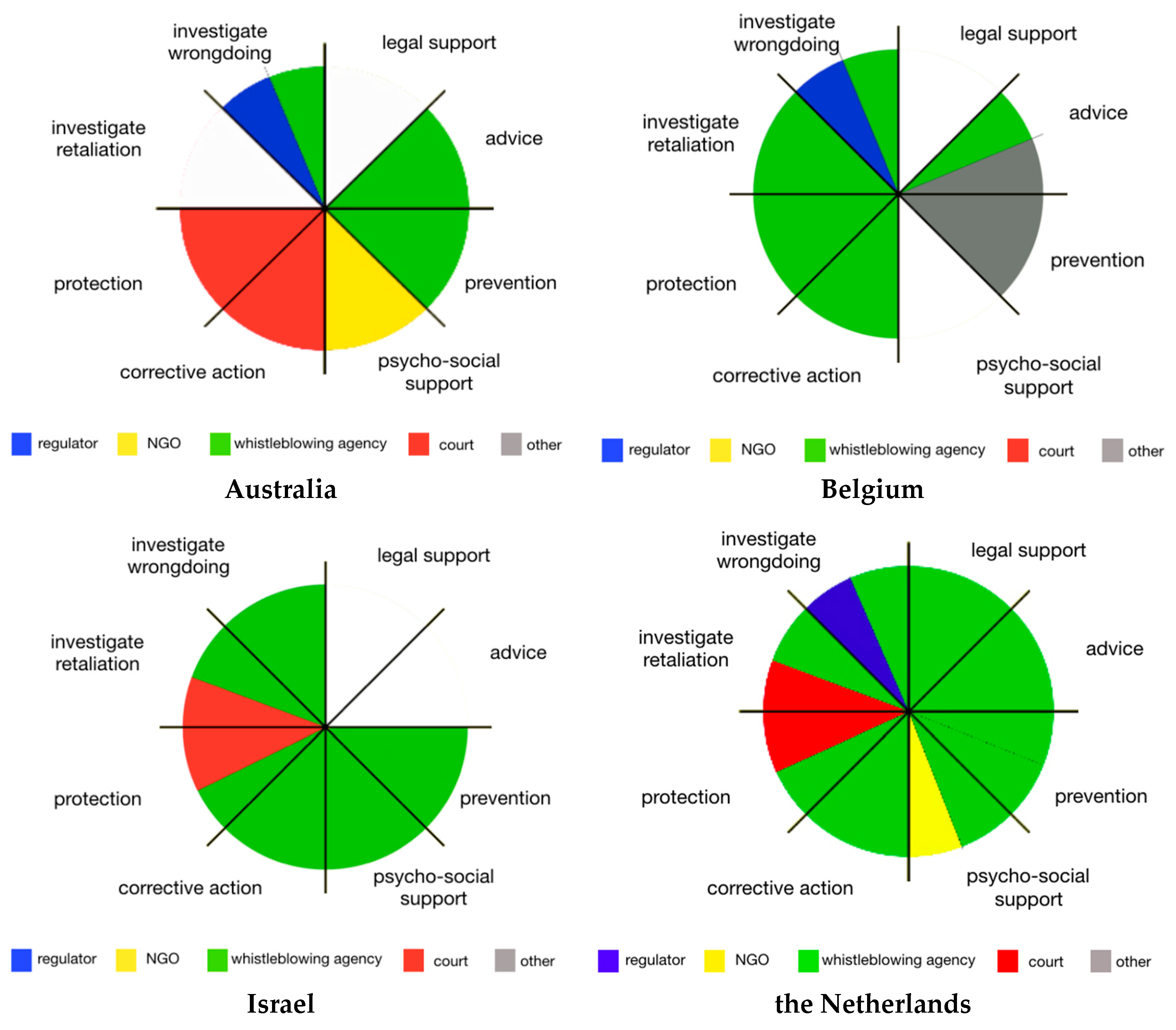 Words: 2617 - Pages: 11. Meanwhile, the paper also showed that globalization presents a risk of the introduction of Western hegemony in the determination of the effectiveness of the resolutions. . Whistleblowers bring attention to the objectionable activity and attempt to effect change. Information systems are organizational assets and must be protected in the same way as any other asset.